– Where Will The Food Riots Start?:

Global food prices have never risen so fast and have never been so high, and as have detailed multiple times in recent months (as this is not simply a one-month, ‘blame it on Putin’ crisis), most recently here, the pieces are in place for some serious tears to form in the social fabric of many nations.

While food prices may be generally seen as an emerging market problem, they will have an effect on developed markets too, something we will see in the upcoming French election.

And as the following table from Bloomberg Economics shows, while Pakistan is already in the midst of a political crisis and Egypt is already coming under financial pressure (along with Peru and Sri Lanka), the surge in food prices is also adding to problems in the developed world.

Nigeria, India, Colombia, Philippines, and Turkey all bear watching, along with Russia… 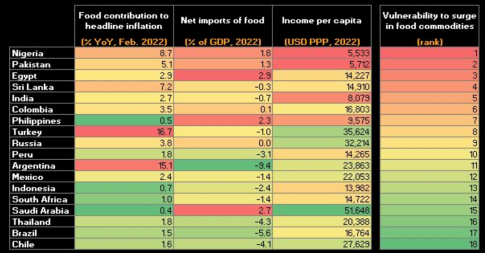 In fact, as PeakProsperity’s Chris Martenson details below, the inflation riots have begun. Peru and Sri Lanka both are experiencing violence as inflation spirals the prices of basic necessities higher and higher. 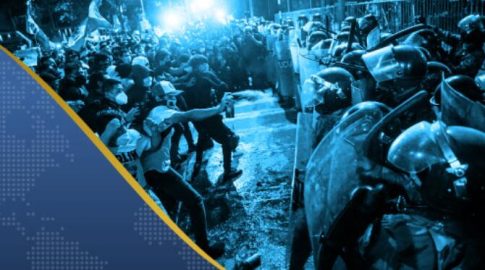 We’ve been here before, and recently.

The Arab Spring was a period of social unrest and riots in 2010 and 2011 that was triggered, in part, by spiking food costs.

As Alfred Henry Lewis said in 1906, “There are only nine meals between mankind and anarchy.”

Chris Martenson, who holds a PhD in pathology and an MBA, contends 2008 was just a warm up to a much bigger calamity. Martenson says, “2008 was the shot across the bow, and that’s when our credit experiment broke, and we have been doing everything possible to paper over it since. . . . When you take real stuff out of the ground, you grow food, you take oil out of the ground, you process ore into steel, and you manufacture real things–that’s real wealth. The claims (such as stocks, bonds and currencies) have to be in proportion to the real wealth, and the claims have been growing and growing and growing for so long that they are way out of balance to the real stuff, and the real stuff isn’t growing like it used to. You can see that in the GDP numbers for the U.S. or the world at large. Growth is slowing, slowing, slowing, and the claims are getting larger and larger. This represents a huge and gigantic source of potential energy. There is a gap there and it’s going to get closed. Only one of two things are going to happen: (1) real stuff starts expanding like crazy, or (2) the claims get destroyed. That’s what we are talking about when we talk about a market crash. The claims get destroyed. People get wiped out. The people who don’t get ruined are people safely over in the real wealth already. If you own an unencumbered farm, if you own a productive asset, if you own gold or silver, or if you own your house outright, you are going to be vastly safer than . . . someone who is leveraged and hinged into this other system.”

Join Greg Hunter as he goes One-on-One with Chris Martenson co-founder of PeakProsperity.com.