… and so does Nokia, which is why the kid of a Nokia manager is the only one in class who has NO cell phone:

A shocking exposé on corruption within World Health Organization ranks, relating to scientific causality of harm from electromagnetic radiation (EMR)

Monday, February 3, 2014 was a very strange day in London. Only the weather was predictable. A cold rain fell as a dais of scientists faced a room full of reporters in the Royal Society Library’s Special Events Room on Carlton House Terrace. With its pillared roots going back to the 1600s, the Royal Society Library had welcomed scientists from all over the world for centuries.

On this day, two scientists distinguished themselves as authors of the thick, glossy tome that was almost the biggest presence in the press briefing. Co-authors Prof. Bernard Stewart, Faculty of Medicine, University of New South Wales and Christopher Wild, PhD, Director of the World Health Organization’s (WHO) esteemed International Agency for Research on Cancer (IARC) prepared to tell the world we are on the verge of a cancer tsunami. World Cancer Report 2014 was nearly six years in the making. IARC is the cancer agency of the WHO, and a core part of their mission is to disseminate information on cancer. They gather information, frequently classify the risk level of various substances, and share that news with the world. This day the news was daunting.

If you’ve got low sperm count and can’t figure out why, it may be because of your cell phone and laptop. Researchers have recently found a link between the radiation emitted by these devices and male infertility.

Now they’ve turned to radiation emitted by cell phones and laptops and have found some startling results. 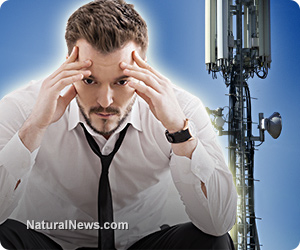 “As long as it is turned on, your mobile phone registers its position…”

Even if your mobile phone is turned off they can still locate your position and listen to your conversations.

Law enforcement is taking advantage of outdated privacy laws to track Americans like never before. New technologies can record your every movement, revealing detailed information about how you choose to live your life. Without the right protections in place, the government can gain access to this information — and to your private life — with disturbing ease.

Read moreACLU: Meet Jack. Or, What The Government Could Do With That Location Data (Video)

By Jeremy Scahill and Glenn Greenwald

The National Security Agency is using complex analysis of electronic surveillance, rather than human intelligence, as the primary method to locate targets for lethal drone strikes – an unreliable tactic that results in the deaths of innocent or unidentified people.

According to a former drone operator for the military’s Joint Special Operations Command (JSOC) who also worked with the NSA, the agency often identifies targets based on controversial metadata analysis and cell-phone tracking technologies. Rather than confirming a target’s identity with operatives or informants on the ground, the CIA or the U.S. military then orders a strike based on the activity and location of the mobile phone a person is believed to be using.

The right of the people to be secure in their persons, houses, papers, and effects, against unreasonable searches and seizures, shall not be violated, and no warrants shall issue, but upon probable cause, supported by oath or affirmation, and particularly describing the place to be searched, and the persons or things to be seized.

The U.S. Supreme Court is delving into the technology-versus-privacy debate, agreeing to hear two cases that test whether police making an arrest may search cellphones without a warrant.

The court’s announcement Friday that it would take the cases came just hours after President Obama outlined his proposals to address government retention of citizen phone data as outlining reforms at the National Security Agency.

The court said it would hear arguments, likely in April, in two cases with conflicting decisions from the lower courts.

Mounting research raises tremendously important questions about the long-term safety of saturating ourselves in electromagnetic frequencies. As a result, at least a dozen countries around the world have begun to adopt a precautionary approach toward cell phone use and other wireless technologies.

For example, two years ago, a Council of Europe committee concluded that “immediate action was required to protect children” after examining the evidence.1 Russian officials have issued the recommendation that all children under the age of 18 should avoid using cell phones entirely. And the UK, Israel, Germany, India and Finland also urge citizens to err on the side of caution with respect to their children’s use of cell phones.

Read moreCell Phone Use Linked To Lower Grades, Anxiety, And Much Worse …

– The Government’s Secret Plan to Shut Off Cellphones and the Internet, Explained (Mother Jones, Nov 26, 2013)

A new study raises concerns of a possible association between cell phone radiation exposure and breast cancer in young women.

The researchers observed that all the patients developed tumors in areas of their breasts next to where they carried their cell phones, often for up to 10 hours per day, for several years. None of the patients had a family history of breast cancer. They all tested negative for BRCA1 and BRCA2 – breast cancer genes linked to about one-half of breast cancer cases – and they had no other known breast cancer risks.

Imaging of the young girls’ breasts revealed a clustering of multiple tumor foci in the part of the breast directly under where their cell phones touched their body.