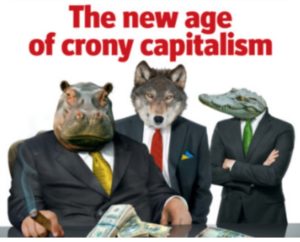 Many of you have already read this past Sunday’s excellent and deeply disturbing article published by the New York Times regarding the shady and inappropriate activities regularly conducted by U.S. “think tanks.” If you haven’t read it yet, I highly suggest you take the time to do so.

It’s important to acknowledge that the U.S. economy has morphed into one gigantic lawless crime scene. An environment in which crony insiders who add zero value to society parasitically feast on the country’s treasure. In the case of so-called “think tanks,” we have organizations receiving copious taxpayer subsidies for the privilege of screwing over the American public.

To understand the topic further, I present you with some excerpts from the article titled, Researchers or Corporate Allies? Think Tanks Blur the Line:

Think tanks, which position themselves as “universities without students,” have power in government policy debates because they are seen as researchers independent of moneyed interests. But in the chase for funds, think tanks are pushing agendas important to corporate donors, at times blurring the line between researchers and lobbyists. And they are doing so while reaping the benefits of their tax-exempt status, sometimes without disclosing their connections to corporate interests.