Tony Blair is an advocate of Globalism – a one world government dictatorship run for the benefit of a cabal of Banking & Corporate Elites https://t.co/8HAPdsrQGk
Aldous Huxley's prediction from 1931 is pretty much already here#Marr pic.twitter.com/ICohoQ3bmv

www.undergroundworldnews.com
Below is a clip from the new amendment.
These final rules implement provisions of the NICS Improvement Amendments Act of 2007 (NIAA) that require Federal agencies to provide relevant records to the Attorney General for inclusion in the National Instant Criminal Background Check System (NICS). Under these final rules, we will identify, on a prospective basis, individuals who receive Disability Insurance benefits under title II of the Social Security Act (Act) or Supplemental Security Income (SSI) payments under title XVI of the Act and who also meet certain other criteria, including an award of benefits based on a finding that the individual’s mental impairment meets or medically equals the requirements of section 12.00 of the Listing of Impairments (Listings) and receipt of benefits through a representative payee. We will provide pertinent information about these individuals to the Attorney General on not less than a quarterly basis. As required by the NIAA, at the commencement of the adjudication process we will also notify individuals, both orally and in writing, of their possible Federal prohibition on possessing or receiving firearms, the consequences of such prohibition, the criminal penalties for violating the Gun Control Act, and the availability of relief from the prohibition on the receipt or possession of firearms imposed by Federal law. Finally, we also establish a program that permits individuals to request relief from the Federal firearms prohibitions based on our adjudication. These changes will allow us to fulfill responsibilities that we have under the NIAA.

We are in that brave new world, and we are capable of being in that Orwellian world, too.

So have both Republican and Democratic congress members.

A small handful of players control:

Read moreU.S. Supreme Court Justice: ‘We Are In that Brave New World, and We Are Capable of Being In that Orwellian World, Too’

While many have pointed out that the Middle-East/Far-East are drifting to a more “Orwellian” world and the West is a more “Huxleyan” environ, the merger of the two dystopias is seemingly growing each day. As The Guardian previously noted, Huxley’s dystopia is a totalitarian society, ruled by a supposedly benevolent dictatorship whose subjects have been programmed to enjoy their subjugation through conditioning and the use of a narcotic drug – the rulers of Brave New World have solved the problem of making people love their servitude. On the Orwellian front, we are doing rather well – as the revelations of Edward Snowden have recently underlined. We have constructed an architecture of state surveillance that would make Orwell gasp.

The most striking parallel of course is that both men foresaw the future as totalitarian rather than democratic and free.

Both Big Brother’s world and the Brave New World are ruled by authoritarian elites of a basically socialist/communist nature, whose only real purpose is the maintenance of their own power and privileges.

Decades ago they saw it all coming… 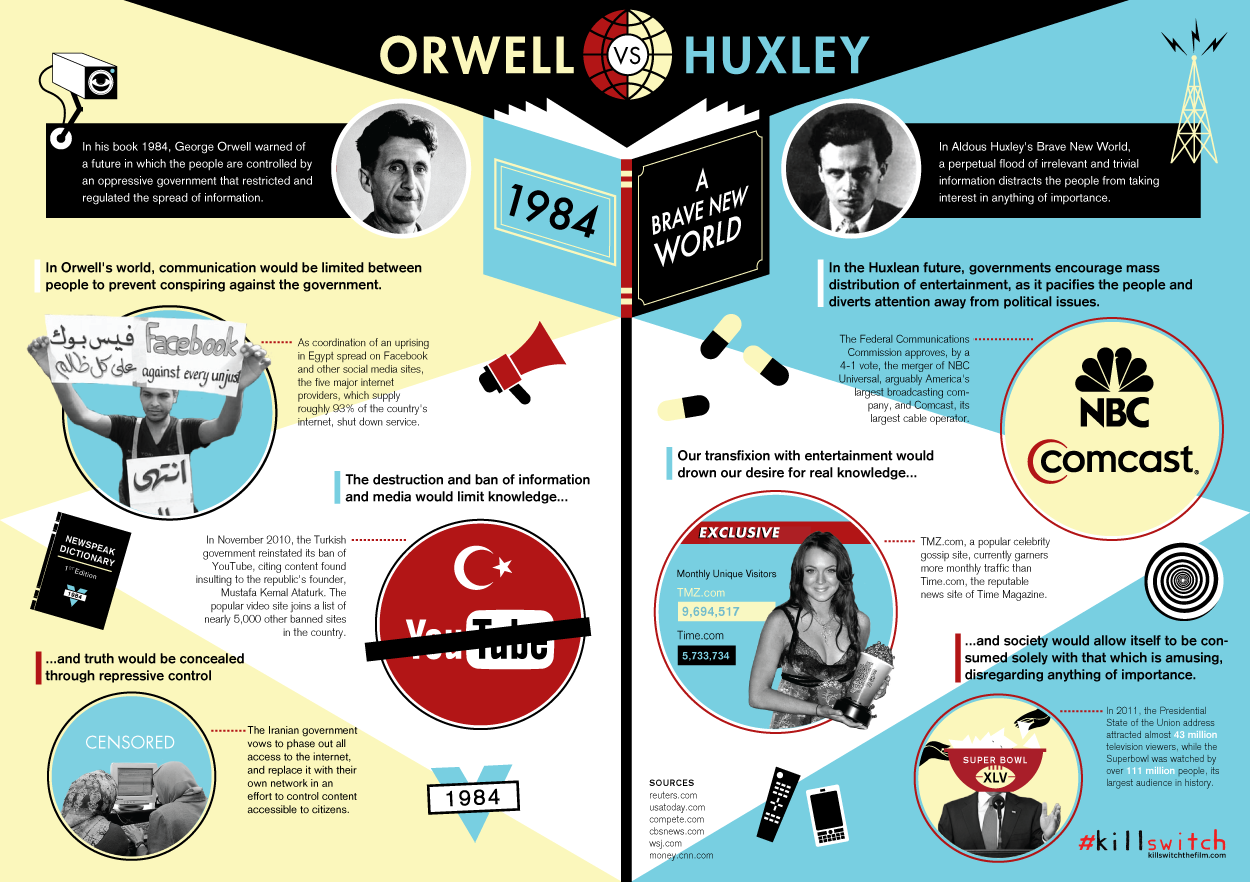 As The Guardian so appropriately summed up,

Under the relentless thrust of accelerating over-population and increasing over-organization, and by means of ever more effective methods of mind-manipulation, the democracies will change their nature; the quaint old forms—elections, parliaments, Supreme Courts and all the rest—will remain. The underlying substance will be a new kind of non-violent totalitarianism. All the traditional names, all the hallowed slogans will remain exactly what they were in the good old days. Democracy and freedom will be the theme of every broadcast and editorial—but Democracy and freedom in a strictly Pickwickian sense. Meanwhile the ruling oligarchy and its highly trained elite of soldiers, policemen, thought-manufacturers and mind-manipulators will quietly run the show as they see fit.

It’s always felt a bit bizarre and, indeed slightly embarrassing, that of all the books I have read in my days, Aldous Huxley’s 1932 classic Brave New World was not amongst them. Not only is the book frequently mentioned to make political and social statements about contemporary times, the novel’s concept always caught my interest. I just never got around reading it. Until late last year. 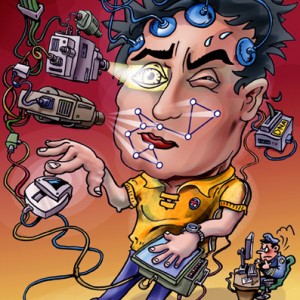 Would you like to surf the Internet, make a phone call or send a text message using only your brain?  Would you like to “download” the content of a 500 page book into your memory in less than a second?  Would you like to have extremely advanced nanobots constantly crawling around in your body monitoring it for disease?  Would you like to be able to instantly access the collective knowledge base of humanity wherever you are?  All of that may sound like science fiction, but these are technologies that some of the most powerful high tech firms in the world actually believe are achievable by the year 2020.  However, with all of the potential “benefits” that such technology could bring, there is also the potential for great tyranny.  Just think about it.  What do you think that the governments of the world could do if almost everyone had a mind reading brain implant that was connected to the Internet?  Could those implants be used to control and manipulate us?  Those are frightening things to consider.

For now, most of the scientists that are working on brain implant technology do not seem to be too worried about those kinds of concerns.  Instead, they are pressing ahead into realms that were once considered to be impossible.

Right now, there are approximately 100,000 people around the world that have implants in their brains.  Most of those are for medical reasons.

But this is just the beginning.  According to the Boston Globe, the U.S. government plans “to spend more than $70 million over five years to jump to the next level of brain implants”.

Read moreA Chip In The Head: Brain Implants Will Be Connecting People To The Internet By The Year 2020

“Within the next generation I believe that the world’s rulers will discover that infant conditioning and narco-hypnosis are more efficient, as instruments of government, than clubs and prisons, and that the lust for power can be just as completely satisfied by suggesting people into loving their servitude as by flogging and kicking them into obedience. In other words, I feel that the nightmare of Nineteen Eighty-Four is destined to modulate into the nightmare of a world having more resemblance to that which I imagined in Brave New World. The change will be brought about as a result of a felt need for increased efficiency. Meanwhile, of course, there may be a large scale biological and atomic war — in which case we shall have nightmares of other and scarcely imaginable kinds.”

In October of 1949, a few months after the release of George Orwell‘s dystopian masterpiece, Nineteen Eighty-Four, he received a fascinating letter from fellow author Aldous Huxley — a man who, 17 years previous, had seen his own nightmarish vision of society published, in the form of Brave New World. What begins as a letter of praise soon becomes a brief comparison of the two novels, and an explanation as to why Huxley believes his own, earlier work to be a more realistic prediction.

Trivia: In 1917, long before he wrote this letter, Aldous Huxley briefly taught Orwell French at Eton.

It was very kind of you to tell your publishers to send me a copy of your book. It arrived as I was in the midst of a piece of work that required much reading and consulting of references; and since poor sight makes it necessary for me to ration my reading, I had to wait a long time before being able to embark on Nineteen Eighty-Four.

Aldous Huxley author of Brave New World speaking at U.C. Berkeley in 1962. Aldous Huxley uses this speaking opportunity to outline his vision for the ‘ultimate revolution’, a scientific dictatorship where people will be conditioned to enjoy their servitude, and will pose little opposition to the ‘ruling oligarchy’, as he puts it. He also takes a moment to compare his book, “Brave New World,” to George Orwell’s “1984” and considers the technique in the latter too outdated for actual implementation.

“There will be, in the next generation or so, a pharmacological method of making people love their servitude, and producing dictatorship without tears, so to speak, producing a kind of painless concentration camp for entire societies, so that people will in fact have their liberties taken away from them, but will rather enjoy it, because they will be distracted from any desire to rebel by propaganda or brainwashing, or brainwashing enhanced by pharmacological methods. And this seems to be the final revolution.”
– Aldous Huxley, Tavistock Group, California Medical School, 1961