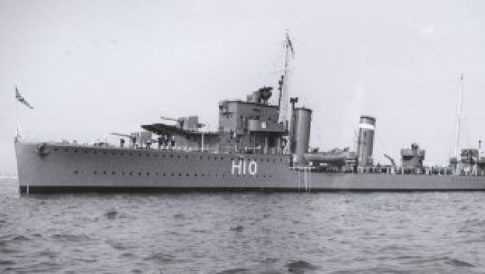 British heavy cruiser HMS Exeter that was sunk during World War II. It has now vanished from its watery grave

– The mystery of World War II shipwrecks that have vanished:

IT’S the bizarre mystery at the bottom of the Java Sea. The wrecks of military warships that have disappeared without a trace.

The warships sunk following one of the bloodiest naval battles of World War II.

During 1942’s Battle of the Java Sea, more than 2000 sailors perished as the Allies struggled to keep the Japanese Navy from marching across South East Asia.

By the time the fighting subsided, at least five allied ships, some with bodies still inside, lay stricken on the seabed.

In 2002, they were still largely intact at the bottom of the Java Sea.

Today, all five have vanished.

The individuals — all allegedly officers of an elite cyber squad within the People’s Liberation Army, US federal prosecutors said Monday — are accused of hacking six American entities and stealing valuable trade secrets and other sensitive business information on behalf of China.

Among those that were targeted, the Department of Justice says, are nuclear technology developer Westinghouse and a large integrated specialties metal company headquarter in Pittsburgh, Pennsylvania, as well as the computer system of a major steelworkers union.

According to US officials, the hackers are all members of the PLA’s prestigious but highly secretive Unit 61398, which a well touted investigation conducted in by cybersecurity firm Mandiant in 2013 revealed to be responsible for targeting no fewer than 141 companies across 20 major industries, including Lockheed Martin, the Chertoff Group and Coca-Cola, all from a 12-story office building in Shanghai.

Presented with no comment… From Gu “KandyGoo” Chunhui to Wang “Ugly Gorilla” Dong… here are the FBI’s current Public Cyber Enemies #1 through 5. 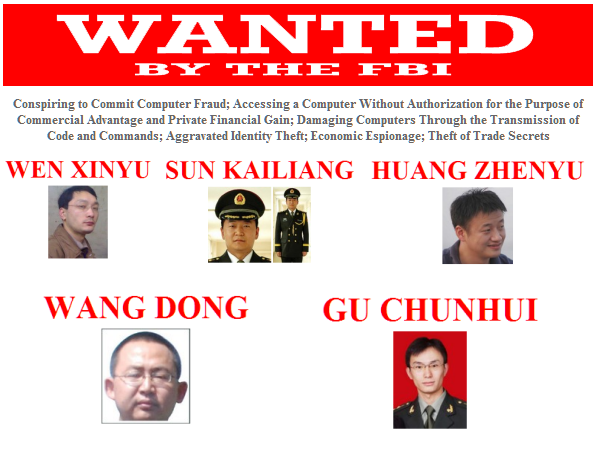 On May 1, 2014, a grand jury in the Western District of Pennsylvania indicted five members of the People’s Liberation Army (PLA) of the People’s Republic of China (PRC) for 31 criminal counts, including: conspiring to commit computer fraud; accessing a computer without authorization for the purpose of commercial advantage and private financial gain; damaging computers through the transmission of code and commands; aggravated identity theft; economic espionage; and theft of trade secrets.

As Jalopnik reports, a BMP light tank was reportedly left stalled on a city street near Mariupol… A gassed-up, fully-loaded tank. Ready to roll. Ready to obliterate some separatists. This is what happened next…
Forward to around 46 seconds for when he finds the big red “Fire” button…

$20 billion yesterday for a “virtual” reality corporation… but it gets better, as Property Guru reports, Singapore-based game developer Planet Arkadia is offering investments in what is believed to be the world’s first million dollar virtual property. It offers the ‘investor’ a chance to participate (by spending real money) in the “vibrantly growing economy of Planet Arkadia” – which we note is entirely virtual. Top, much?

Singapore-based game developer Planet Arkadia is offering investments in what is believed to be the world’s first million dollar virtual property.

There are some astonishing things you’re not being told about Malaysia Airlines Flight 370, the flight that simply vanished over the Gulf of Thailand with 239 people on board.

The mystery of the flight’s sudden and complete disappearance has even the world’s top air safety authorities baffled. “Air-safety and antiterror authorities on two continents appeared equally stumped about what direction the probe should take,” reports the Wall Street Journal.

WSJ goes on to report:

A Mexican drug lord who had been reported dead more than three years ago was killed in a shootout with federal forces in western Mexico early on Sunday, a government official said.

Nazario Moreno, a leader of a powerful criminal gang that has ravaged the western state of Michoacan, had been reported killed by the government in a firefight in December 2010.

The family of Michael Boatwright — who was found unconscious in a Palm Springs motel room four months ago and woke up speaking only Swedish — heard about his whereabouts for the first time Monday.The Desert Sun located a sister of the 61-year-old, who has spent more than 19 weeks at Desert Regional Medical Center insisting he is named Johan Ek and has no memory of his life as Boatwright. Despite the Florida identification found in his wallet, he has been speaking only in Swedish and says he does not understand English.

Boatwright’s family did not know whether he was alive or dead, his sister Michelle Brewer told The Desert Sun over the phone from her home in Louisiana.“I haven’t talked to him in years. He just disappeared,” she said.