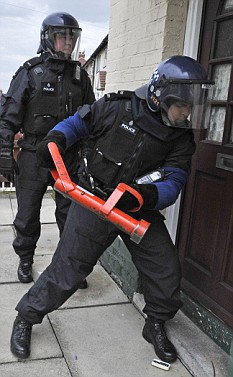 Extreme measures: There are more than 1,000 laws which give officials the right to enter private property

The march of the Big Brother state under Labour was highlighted last night as it was revealed that there are now 1,043 laws that give the authorities the power to enter a home or business.

Nearly half have been introduced since Labour came to power 11 years ago. They include the right to:

• Invade your home to see if your pot plants have pests or do not have a ‘plant passport’ (Plant Health England Order 2005).

• Survey your home and garden to see if your hedge is too high (Anti-Social Behaviour Act 2003).

• Check that accommodation given to asylum seekers is not being lived in by non-asylum seekers (Immigration and Asylum Act 1999).

The rise in clipboard-wielding state inspectors flies in the face of repeated pledges by Ministers to curb the power of bureaucrats.

The full extent of the state’s ‘powers of entry’ is revealed in documents slipped out quietly by the Government last week.

The information was posted on the Home Office website, but in a highly unusual move, the computer file was locked to prevent it being copied or printed. A secret Home Office password was required to access the file.

A Home Office spokeswoman denied the restrictions were an attempt to stop the state’s powers being circulated more widely.

She claimed it was a ‘mistake’ and the file would be unlocked tomorrow.

Read moreNow there are 1,000 laws that will let the state into your home

Families are furious about plans by a council’s bin police to question them about their medical history.

Officials in Plymouth, Devon, are to send a questionnaire to every household asking them to give intimate personal details about their family.

Householders are also being asked to nominate one person who will take legal responsibility for anything put in their bins.

The council is even asking how many children families have and whether they use disposable nappies.

The forms are to be sent to all homes in the city as part of a ‘zero tolerance’ policy on bins.

The council wants to increase fixed penalties from £50 to £110 for those who put bins out early, fail to recycle, overfill wheelie bins or put the wrong rubbish in the wrong containers.

They are asking each household to nominate one person as responsible so it will be easier for them to prosecute without having to prove who put out the offending bins.

The council is also considering interviewing suspected bin offenders under caution in procedures similar to the way police question criminals.

The draft letter, which has been seen by opposition councilors, also asks how many people live at each address, whether they have any medical conditions and if their families use disposable nappies.

Officials from the Conservative-run council hope the information sent back by families will make it easier to prosecute or impose fixed penalties.

It follows the failure of a pioneering prosecution by Exeter City Council 45 miles away which failed because they could not prove that household waste in a recycling bin was put there by the householder.

The draft letter to all homes in Plymouth will set out what is and is not allowed in each type of bin.

Tens of thousands of Australian households will have their rubbish and recycling monitored by tracking devices placed in their dustbins in a move dubbed by the media as “Bin Brother”.

Officials on Monday confirmed that 78,000 new council-issued bins in the eastern suburbs of Sydney have been fitted with small radio frequency tags, which allow for data collection.

Each bin will transmit a unique identification code to the rubbish truck which weighs and empties it each week, allowing officials to identify how much waste is produced at each address.