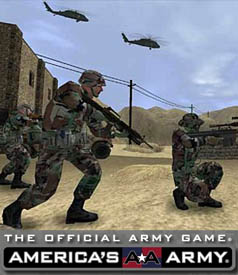 “America’s Army” is a video game developed in part by the US Army to lure potential recruits. (Photo: techtarget.com)

In May of 2002, the United States Army invaded E3, the annual video game convention held in Los Angeles. At the city’s Convention Center, young game enthusiasts mixed with camouflaged soldiers, Humvees and a small tank parked near the entrance. Thundering helicopter sound effects drew the curious to the Army’s interactive display, where a giant video screen flashed the words “Empower yourself. Defend America … You will be a soldier.”(1)

May 6 (Bloomberg) — The U.S. Army won’t be able to pay soldiers beyond June 15 unless Congress approves $108 billion more for the wars in Iraq and Afghanistan or authorizes a funds transfer, a Defense Department official said.

If the supplemental spending legislation isn’t enacted by then, the Pentagon will be forced to seek congressional authority to use money designated for other services to fund the Army payroll, department spokesman Geoff Morrell said.

“He is taking members, leaders, at their word that they will have this bit of business done by Memorial Day,” Morrell said. At the same time, Gates asked his budget personnel “to begin contingency planning for the possibility that the Congress does not meet its goal of passing a budget bill the president can sign” by that date.

If the measure isn’t approved, Morrell said, the accounts that fund military operations and equipment maintenance would last a little longer than the Army payroll account, “but not much more.”

(NaturalNews) A TV news report from Germany available at: (http://www.youtube.com/watch?v=MVc9GX5K_As) confirmed that the German Military is manipulating the climate in Germany. As a result scientists have filed a lawsuit against the government for climate manipulation.

The video concludes, “We can state with a 97% certainty that we have on our hands chemical trails (chemtrails) comprised by fine dust containing polymers and metals, used to disrupt radar signals.”

The purpose of chemtrails, which are well documented over the United State and other parts of the world, according to researchers, is to manipulate the weather. Karsten Brandt, German meteorologist states, “The Federal Army is Manipulating the Meteorological maps.”