Just two weeks ago we warned of the looming “hyperinflation monster” in Africa with the continent appearing to be running out of dollars as some of Africa’s largest economies, including Nigeria, Angola, Ethiopia and Mozambique, are restricting access to the greenback to protect dwindling reserves. Specifically we warned of Angola’s already-soaring inflation hampering its ability to ‘adjust’ its currency towards its black market ‘reality’. But that did not stop the central bank devaluing Kwanza by 15% over the weekend – the most since 2001 – to record lows as crude prices crush their economy and the flow of USDs.

The son of a former French president, an Israeli-Russian billionaire and a tycoon with ties to Arizona’s jet set were among the headliners yesterday as 42 defendants went on trial in Paris, accused in a worldwide web of trafficked arms to Angola, money laundering and kickbacks.

Defense lawyers and Angola’s government are trying to stop the show, however, arguing the trial has no right to go on.

Prosecutors allege that between 1993 and 1998, two key suspects – French magnate Pierre Falcone, a longtime resident of Scottsdale, Arizona, and Arkady Gaydamak, an Israeli businessman based in France at the time – organized a total of $791 million in Russian arms sales to Angola, a breach of French government rules.

Most of the other suspects are accused of receiving money or gifts, undeclared to tax authorities, from a company run by Falcone in exchange for political or commercial favors. Investigators say the corruption grew into a tangle of laundered money and parallel diplomacy that left a stain on France’s relations with Africa.

Among the defendants who filed into a Paris courthouse Monday were icons of France’s political elite – including late President Francois Mitterrand’s eldest son, Jean-Christophe, and an economic adviser to current President Nicolas Sarkozy, Jacques Attali.

On June 5, 1873, in a letter to The Times, Sir Francis Galton, the cousin of Charles Darwin and a distinguished African explorer in his own right, outlined a daring (if by today’s standards utterly offensive) new method to ‘tame’ and colonise what was then known as the Dark Continent.

‘My proposal is to make the encouragement of Chinese settlements of Africa a part of our national policy, in the belief that the Chinese immigrants would not only maintain their position, but that they would multiply and their descendants supplant the inferior Negro race,’ wrote Galton.

‘I should expect that the African seaboard, now sparsely occupied by lazy, palavering savages, might in a few years be tenanted by industrious, order-loving Chinese, living either as a semidetached dependency of China, or else in perfect freedom under their own law.’ 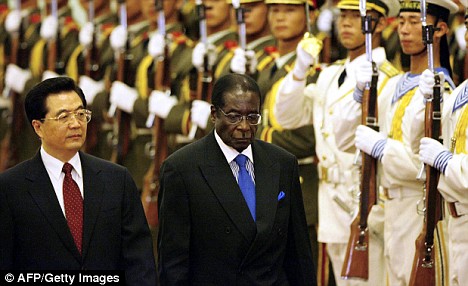 Close relations: Chinese President Hu Jintao accompanies Zimbabwe President Robert Mugabe to a ceremony in the Great Hall of the People in Beijing

Read moreHow China’s taking over Africa, and why the West should be VERY worried