So that implicates that he is a Rothschild Illuminati puppet as well?

One thing for sure:

Here is a Masonic handshake between Babis & Sobotka… 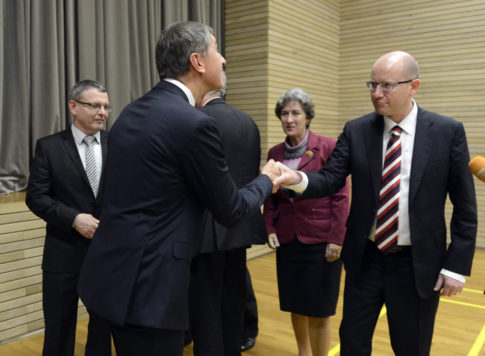 The Czech election is taking place today, with the “Czech Donald Trump”, Andrej Babis, expected to be voted in as Prime Minister. As we noted last week, Babis is the Czech Republic’s second wealthiest person, is demanding the return of greater sovereignty from the EU, rejects the Euro and is against Muslim immigration. He has pledged to run the country like a business, while eliminating corruption. Oh, and he is also facing criminal charges for fraud. Babis’s anti-establishment party ANO stands for “Action of Dissatisfied Citizens” and is also the Czech word for “yes”.

The Prague Daily Monitor (PDM) reports that “ANO is the clear favourite of (sic) the election that will take place on Friday and Saturday. Opinion polls indicate that ANO is likely to win two times more votes than the CSSD, which may be narrowly overcome by the Communists (KSCM) and possibly even the Freedom and Direct Democracy (SPD) movement of populist Tomio Okamura or the right-wing Civic Democrats (ODS).”

“Andrej Babis is a gangster oligarch, and a terrible populist: he will promise anything, that will help him elected… In reality, he supports immigration of cheap work-force for his industries and agricultures…

He bought for his huge money a perfect PR agency, his team is really professional…