– Alexis Tsipras’ Open Letter To Germany: What You Were Never Told About Greece (ZeroHedge, Jan 29, 2015):

Authored by Alexis Tsipras via Syriza.net,

Most of you, dear [German] readers, will have formed a preconception of what this article is about before you actually read it. I am imploring you not to succumb to such preconceptions. Prejudice was never a good guide, especially during periods when an economic crisis reinforces stereotypes and breeds biggotry, nationalism, even violence.

In 2010, the Greek state ceased to be able to service its debt. Unfortunately, European officials decided to pretend that this problem could be overcome by means of the largest loan in history on condition of fiscal austerity that would, with mathematical precision, shrink the national income from which both new and old loans must be paid. An insolvency problem was thus dealt with as if it were a case of illiquidity.

Read moreAlexis Tsipras’ Open Letter To Germany: What You Were Never Told About Greece 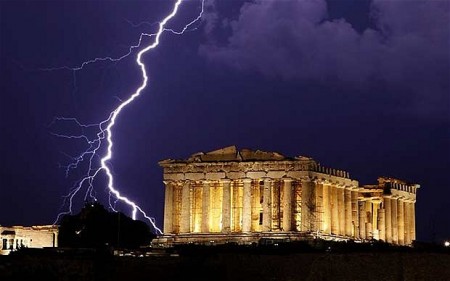 The first public address of Greece’s new leaders, Alexis Tsipras has begun. The key highlights of his speech so far:

Europe will not be pleased.

The pro-bailout New Democracy party has come out on top in Greece’s parliamentary elections, having gained 29.6 per cent of the votes. With nearly all the votes counted, the anti-austerity leftist Syriza party is trailing on 26.9 per cent.

The results have kept fears of Greece’s imminent exit from the eurozone at bay for the time being. “The Greek people today voted for Greece to remain on its European path and in the eurozone,” New Democracy leader Antonis Samaras said after his party had won, AP reports. He added that voters had chosen “policies that will bring jobs, growth, justice and security.”

The pro-bailout Socialist PASOK party came third with 12.3 per cent of the votes. The far-right Golden Dawn part won 6.9 per cent.