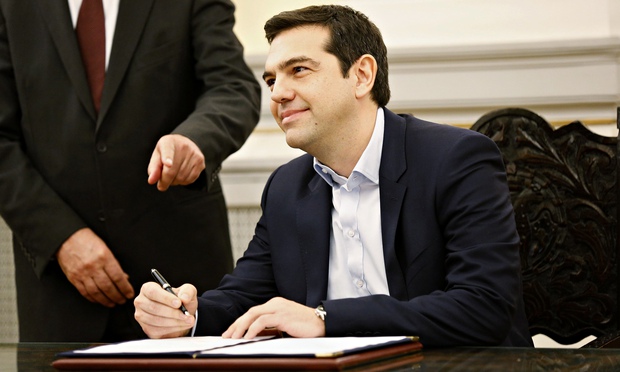 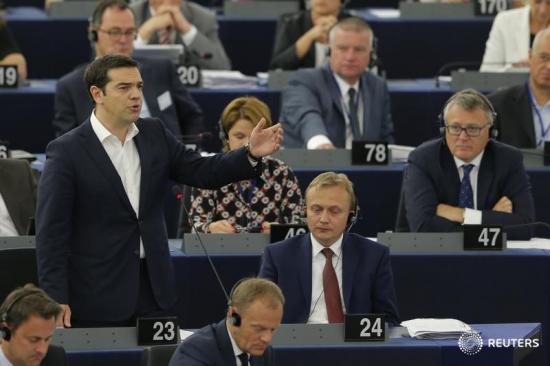 As we reported yesterday, following the latest European leaders summit, Greece was given until the end of the week to come up with a proposal for sweeping reforms in return for loans that will keep the country from crashing out of Europe’s currency bloc and into economic ruin.

“The stark reality is that we have only five days left … Until now I have avoided talking about deadlines, but tonight I have to say loud and clear that the final deadline ends this week,” European Council President Donald Tusk told a news conference.

It did that moments ago when Greece officially submitted a request for a three-year loan facility from the European Stability Mechanism also promising to implement tax reform, and pension measures at the beginning of next week, which had been the biggest sticking point in negotiations for the past 5 months. And to think Syriza’s main election promise was no more bailouts and the Greek people resoundly said not to just this over the weekend.

– The Greferendum Shocker: Tsipras “Intended To Lose” And Is Now “Trapped By His Success” (ZeroHedge, July 7, 2015):

It all started with a report by the Telegraph’s Ambrose Evans-Pritchard, whose release of on the record comments by Yanis Varoufakis (which we noted was rather surprising) that Greece was contemplating a parallel currency and potentially nationalizing Greek banks over the weekend, was supposedly the catalyst that got the Greek finmin fired. As a reminder, this is what Varoufakis told AEP on Sunday night: “If necessary… issue parallel liquidity and California-style IOU’s, in an electronic form. We should have done it a week ago.” And this is what the WSJ said on Monday morning:

… the premier decided to act after Mr. Varoufakis told a U.K. newspaper late Sunday that Greece might introduce a parallel currency and electronic IOUs similar to those issued previously in California. Mr. Varoufakis quickly backtracked on his comments to the Daily Telegraph, but his prime minister had had enough, the people familiar with the matter say.

That was the first indication that the wheels had officially come off the Greek wagon.

Read moreThe Greferendum Shocker: Tsipras “Intended To Lose” And Is Now “Trapped By His Success”

– Ahead Of Dark ATMs, Import Shortages, Tsipras Goes Back To Brussels Begging For Bailout (ZeroHedge, July 7, 2015):

On the heels of Sunday’s referendum wherein Greeks essentially gave the greenlight for an unceremonious EMU exit should Europe decide to spurn the IMF and stick to a “no debt relief” policy for Athens, PM Alexis Tsipras and his newly-appointed finance minister Euclid Tsakalotos are making a final push to break the stalemate with creditors before the ATMs go dark and a supplier credit crunch creates widespread shortages of imported goods.

EU finance ministers will convene in Brussels first, followed by a meeting of European leaders which is scheduled to begin at 6 pm local time. According to Sueddeutsche Zeitung, the Greek delegation will table a proposal that looks quite a bit like what voters explicitly rejected on Sunday. Here’s more (Google translated): 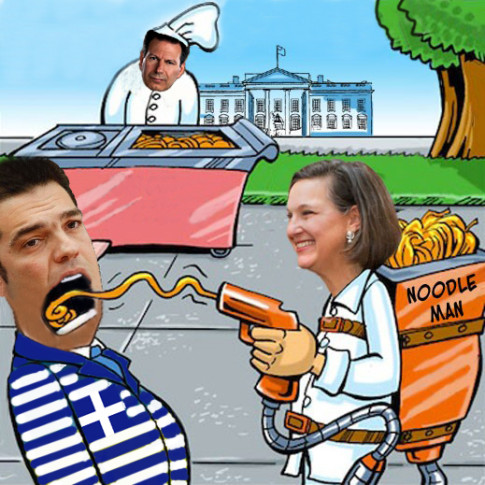 – Nuland’s Nemesis: Will Greece Be Destroyed to Save Her From Russia, Like Ukraine? (Dances With Bears via Blacklisted News, July 6, 2015):

By John Helmer, the longest continuously serving foreign correspondent in Russia, and the only western journalist to direct his own bureau independent of single national or commercial ties. Helmer has also been a professor of political science, and an advisor to government heads in Greece, the United States, and Asia. He is the first and only member of a US presidential administration (Jimmy Carter) to establish himself in Russia. Originally published at Dances with Bears

A putsch in Athens to save allied Greece from enemy Russia is in preparation by the US and Germany, with backing from the non-taxpayers of Greece – the Greek oligarchs, Anglo-Greek shipowners, and the Greek Church. At the highest and lowest level of Greek government, and from Thessaloniki to Milvorni, all Greeks understand what is happening. Yesterday they voted overwhelmingly to resist. According to a high political figure in Athens, a 40-year veteran, “what is actually happening is a slow process of regime change.”

Read moreNuland’s Nemesis: Will Greece Be Destroyed to Save Her From Russia, Like Ukraine? 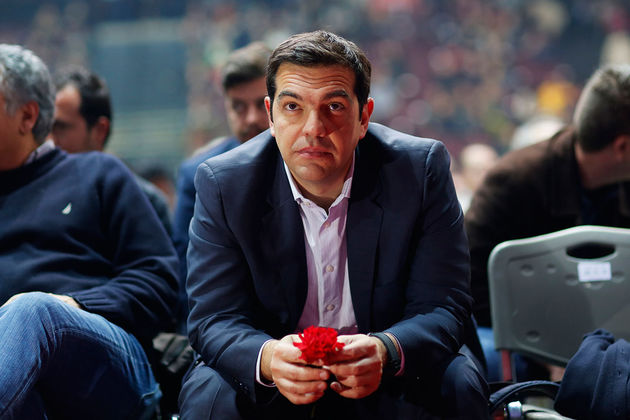 Congratulations Greece: for the first time you had the chance to tell the Troika, the unelected eurocrats, and the entire status quo establishment, not to mention all the banks, how you really felt and based on the most recent results, some 61% of you told it to go fuck itself.

“Another great article, how the Greek vote against the greedy guts gives great challenges to the EU leaders, not just the greedy cow running Germany……Merkel (of course), along with the head of the IMF, and a few others, all will be needing new jobs. This is a huge slap in their faces, well deserved, but the economic pain their investors are now experiencing will get them out of office very quickly. Good riddance.” 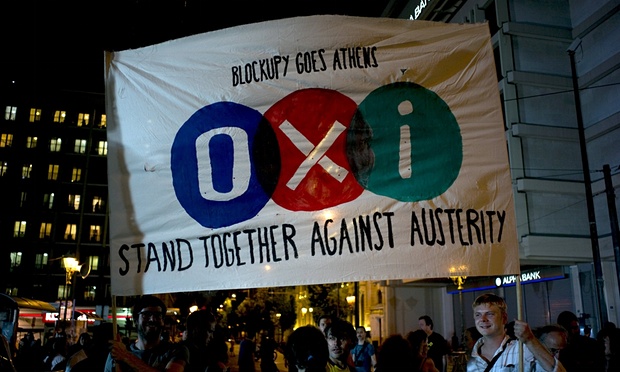 No vote supporters hold a banner during celebrations in Athens as results begin to indicate a clear victory against eurozone austerity measures. Photograph: Stringer/Reuters

Greece delivered a landslide no vote to the eurozone’s terms for the country remaining in the single currency on Sunday night, unleashing a seismic political shift that could derail the European project. The verdict confronts the EU’s leadership with one of its most severe ­crises of confidence and leaves Greece facing potential financial collapse and exit from the euro.

In a polarising referendum called by the radical leftist government of Alexis Tsipras at only eight days notice, Greeks voted by more than 60% to 40% in support of the prime minister, spurning the extra austerity demanded mainly by Germany and the International Monetary Fund in return for an extension of bailout funds. 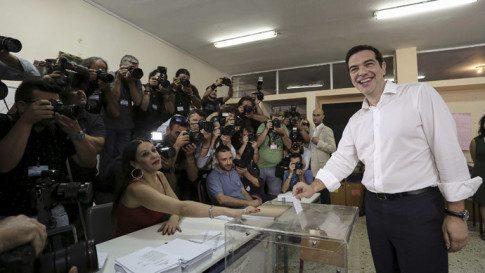 Polling stations have opened across Greece as millions of people are expected to cast ballots on whether to accept more austerity in exchange for international aid. Recent polls have predicted a knife-edge result, with ‘Yes’ having a slight advantage.

Greek Finance Minister Yanis Varoufakis has reiterated in an interview with Germany’s Bild newspaper that he will resign if Greeks vote “Yes” in Sunday’s referendum.

But he added: “There will not be a majority for ‘Yes’,” Reuters reported. 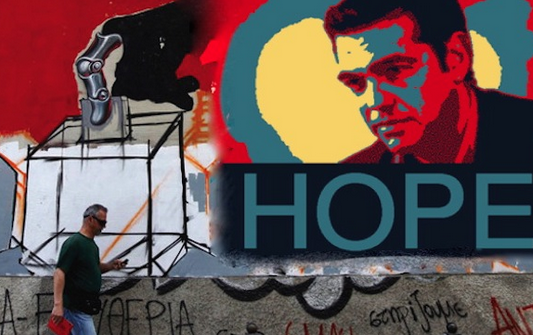 May as well spoil the ending of what happens at midnight local time today. Nothing (as previously reported). From Reuters: 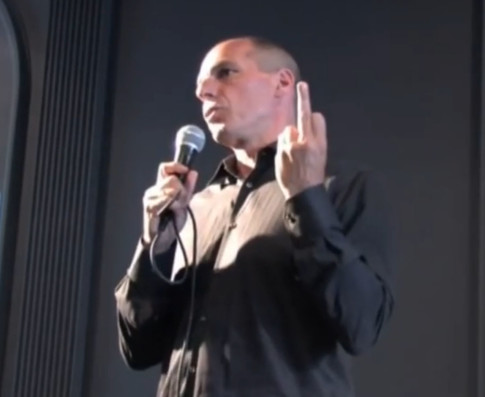 AP has the well-known by now details: