How the self-described ‘mighty’ have fallen. It was a month ago when we first heard of this mysterious British FX trader who dropped $300k in a Liverpudlian nightclub on a bottle of champagne that weighed more than the models he was ‘dating’ that night. The ‘talented, charismatic, and likable’ Alex Hope has been arrested by London’s Financials Services Authority (FSA) in connection with an investigation into a suspected unauthorized FX trading scheme. As City A.M reports this morning, Hope’s publicist confirms he is the 23 year old in question – though he ‘obviously’ denies all allegations. The schadenfreude on London’s FX ‘trading’ desks (as opposed to bucket-shop retail-mauling FX ‘brokerage’ shops) is palpable from what we hear as ‘it couldn’t have happened to a nicer guy’ echoes off the City’s pub ceilings. As yet no charges have been filed – we await with baited breath for the sad truth to be outed. 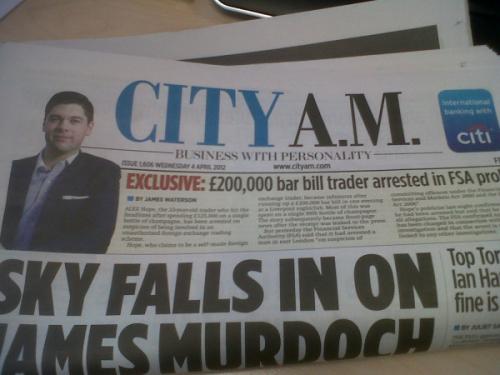 The UK’s Daily Mirror newspaper has uncovered the FX trader who dropped over $300k in a Scouse club. It is a 23-year old ‘self-taught’ barrow-boy named (somewhat ironically in our view) Alex Hope. Self-described as “talented (three years in and a six-figure salary, hhmm), charismatic (its amazing how much ‘charisma’ a GBP125k bottle of bubbly will buy), and thoroughly likeable (ditto) man. Alex Hope exudes knowledge…” and is willing to share it with you according to his website. How did he become this B.S.D. of the FX markets? “I took two months off my job at Wembley, got really obsessed with reading charts and got the guts to start trading properly.” This self-made rosy-cheeked young man with a penchant for mind-numbingly-arrogant-looking photos on his website may have just become the poster boy for all that is ‘great’ about the free market – or perhaps a skim through his blog and media exposure will reassure us all that anything is possible as we note he does have some good taste (not just in Champagne) in RTing our posts on Twitter.

We can only HOPE that the next time he decides to go down the rub-a-dub-dub for a Leo Sayer, maybe he’ll take some of us Septic Tanks with him on the frog-and-toad…as the days of the ship-it-in-large-on-the-left John, done-a-yard by-breakfast spot FX trader are clearly back with us.

And here is his Bio, enjoy: