Well, it does if you consider the information down below.

Turkish security forces found a 2kg cylinder with sarin gas after searching the homes of Syrian militants from the Al-Qaeda linked Al-Nusra Front who were previously detained, Turkish media reports. The gas was reportedly going to be used in a bomb.

The sarin gas was found in the homes of suspected Syrian Islamists detained in the southern provinces of Adana and Mersia following a search by Turkish police on Wednesday, reports say. The gas was allegedly going to be used to carry out an attack in the southern Turkish city of Adana. 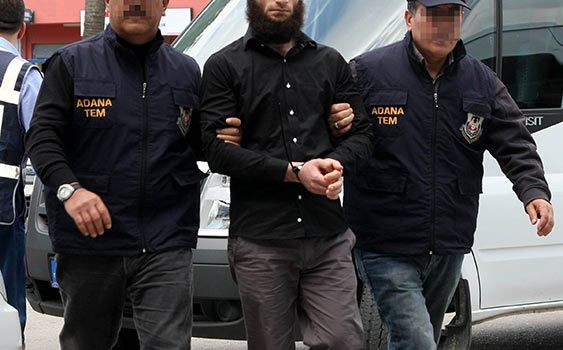 Google translation (Original article down below):

Security General Directorate (EGM), terrorist organizations in Turkey not do any extensive security measures in a bomb and so is the action.Some suspicious vehicles and people arriving and departing to cities being reviews. In this context, the terrorist organization Al-Qaeda and Al Nusra Front militants connected with the organization of security units in preparation for some action, had pursued the fugitives. EGM Intelligence and Terrorism Department teams with whom they are connected by a recording of the suspects were followed step by step. Also possible action plans of the organization has been reached. After reaching this information, the addresses of 12 people were identified as being connected in Adana organization. In this context, the dawn of yesterday morning with the operation of the suspects were taken into custody and brought to Adana Security Directorate.

If staying in a large number of calls made from the suspects residence information, documents and digital data were seized. Also belonging to the suspects were taken to secure the weapons and bullets for review. In addition, the addresses of the suspects were seized two kilograms in the Sarin gas. As is known, Sarin gas, known as a kind of nerve gas. Is a colorless and odorless gas that is extremely difficult for the diagnosis of, a feature that is effective and lethal. In 1991, the United Nations (UN), the sarin gas in the category of weapons of mass stored by storing banned in 1993 by the Convention on Chemical Weapons. Anti-Terror Branch of Istanbul Police Department suspects the other hand, the Directorate continues to queries. Police accused, how to obtain Gazı’nı Sarin led to the question that they will use and for what purpose. The suspects, they’ll take their supplies to areas of conflict in Syria as a priority information they put forward. The police suspects that how they reached Gazı’na work deepens Sarin. Also on the subject of chemical immediate seizure of the property of a gas with the Interior Ministry and the Prime Minister’s Office also reported.

AND as the Today’s Zaman reports:

For the leader of the Republican People’s Party (CHP), Kemal Kılıçdaroğlu, Erdoğan is “sending terrorists into Syria,” an unusually blunt choice of words to criticize the prime minister’s staunch support for the Syrian opposition. In a speech in front of a cheering crowd in Antalya, Kılıçdaroğlu declared on Sunday that Erdoğan is the “terrorist chieftain” for Syria, a term he borrowed from the Turkish jargon that has long been used to refer to Abdullah Öcalan, the currently jailed leader of the Kurdistan Workers’ Party (PKK).