It does not matter whether you live in France, Germany, Italy, Spain or in Britain, after the coming (planned) financial collapse there will be a (planned) full scale civil war happening all over Europe.

And the U.S. will get the greatest revolution/civil war of all time.

German authorities are hunting for dozens of members of one of the most violent jihadist groups in Syria, Jabhat al-Nusra, but who, according to Der Spiegel, entered Germany disguised as refugees.

The men, all former members of Liwa Owais al-Qorani, a rebel group destroyed by the Islamic State in 2014, are believed to have massacred hundreds of Syrians, both soldiers and civilians.

German police have reportedly identified around 25 of the jihadists and apprehended some of them, but dozens more are believed to be hiding in cities and towns across Germany.

“You cannot distinguish between good and evil, …”

“The terrorists came in our house and took our women to rape them and you let them all come to Europe, … they are all from ISIS and Al-Nusra (= Al-Qaeda) … while here all Christians, Druzes and Alevi are fighting them.”

“For this mistake you will pay, and if not you, then your children.”

“All those that you have allowed to come are our garbage!”

“You will regret it….

“There will be explosions in France, Germany, Italy, Austria, Russia, Serbia …”

“They will stay until they have cut off the heads of everyone of you.”

– Al-Nusra’s Name has been Removed from Terror List after Rebranding:

According to a recent report [1] by CBC Canada, al-Qaeda’s affiliate in Syria, which was formerly known as al-Nusra Front and then Jabhat Fateh al-Sham (JFS) since July 2016, has been removed from the terror watch-lists of the US and Canada after it merged with fighters from Zenki Brigade and hardline jihadists from Ahrar al-Sham and rebranded itself as Hayat Tahrir al-Sham (HTS) in January this year.

The US State Department is hesitant to label Tahrir al-Sham a terror group, despite the group’s link to al-Qaeda, as the US government has directly funded and armed the Zenki Brigade, one of the constituents of Tahrir al-Sham, with sophisticated weaponry including the US-made antitank TOW missiles.

Read moreAND NOW: Al-Nusra’s Name has been Removed from Terror List after Rebranding

"Moderate rebel" Abu Wedi from Idlib, was fighting with Al Nusra has made it safely to Europe. Ticket & accommodation paid by France & UK pic.twitter.com/Mr0S2EyULr

Read moreISIS Attacks US-Led Base In Southern Syria, As Assad Said To Use White Phosphorus

– Hero Congresswoman Exposes Truth on CNN After Secret Visit to Syria, ‘There Are No Moderate Rebels’

“Every place that I went, every person that I spoke to, I asked this question to them. And, without hesitation they said ‘there are no moderate rebels. Who are these moderate rebels that people keep speaking of?’ Regardless of the names of these groups, the strongest fighting force on the ground in Syria is Al Nusra or Al Qaeda and ISIS. That is a fact.”

As much of Washington prepared for the inauguration of President Donald Trump, I spent last week on a fact-finding mission in Syria and Lebanon to see and hear directly from the Syrian people. Their lives have been consumed by a horrific war that has killed hundreds of thousands of Syrians and forced millions to flee their homeland in search of peace.

It is clear now more than ever: this regime change war does not serve America’s interest, and it certainly isn’t in the interest of the Syrian people.

I traveled throughout Damascus and Aleppo, listening to Syrians from different parts of the country. I met with displaced families from the eastern part of Aleppo, Raqqah, Zabadani, Latakia, and the outskirts of Damascus. I met Syrian opposition leaders who led protests in 2011, widows and children of men fighting for the government and widows of those fighting against the government. I met Lebanon’s newly-elected President Aoun and Prime Minister Hariri, U.S. Ambassador to Lebanon Elizabeth Richard, Syrian President Assad, Grand Mufti Hassoun, Archbishop Denys Antoine Chahda of Syrian Catholic Church of Aleppo, Muslim and Christian religious leaders, humanitarian workers, academics, college students, small business owners, and more.

Their message to the American people was powerful and consistent: There is no difference between “moderate” rebels and al-Qaeda (al-Nusra) or ISIS — they are all the same. This is a war between terrorists under the command of groups like ISIS and al-Qaeda and the Syrian government. They cry out for the U.S. and other countries to stop supporting those who are destroying Syria and her people.

I heard this message over and over again from those who have suffered and survived unspeakable horrors. They asked that I share their voice with the world; frustrated voices which have not been heard due to the false, one-sided biased reports pushing a narrative that supports this regime change war at the expense of Syrian lives.

I heard testimony about how peaceful protests against the government that began in 2011 were quickly overtaken by Wahhabi jihadist groups like al-Qaeda (al-Nusra) who were funded and supported by Saudi Arabia, Turkey, Qatar, the United States, and others. They exploited the peaceful protesters, occupied their communities, and killed and tortured Syrians who would not cooperate with them in their fight to overthrow the government.

Read moreTulsi Gabbard: The Syrian People Desperately Want Peace – There Is No Difference Between “Moderate” Rebels And Al-Qaeda (Al-Nusra) Or ISIS —They Are All The Same

The Jabhat Fatah al-Sham organization (formerly the al-Nusra Front) claimed to be responsible for Monday’s murder of Russian Ambassador Andrey Karlov’s in Ankara. The terrorist group claimed responsibility via a letter which appeared on the Internet. The letter was written in Arabic. 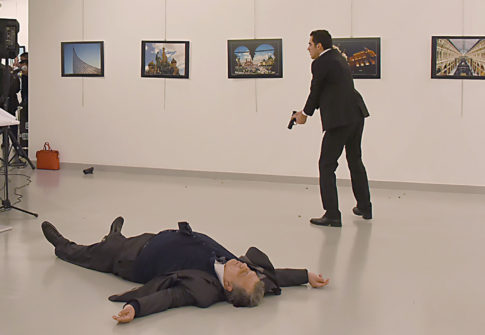 In its statement, the group said “one of the heroes of the Jaish al-Fatah, Mert Alt?ntas carried out the execution of Russian Ambassador Andrey Karlov in Ankara,” because the world remains silent to what is taking place in Aleppo, no support comes to the Muslims in the Levant and for the victory of the Syrian people.