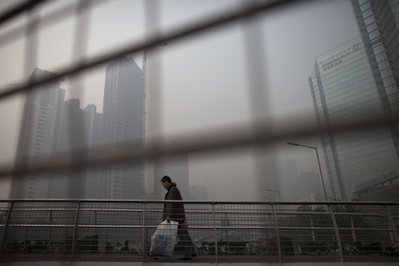 A man walks on a pedestrian overpass on a hazy day at Beijing’s Central Business District, China, Friday, Nov. 19, 2010. Beijing’s air, notorious for its pollution, soared above 500 on the air quality index on Friday, considered hazardous for all populations by U.S. standards. (AP)

BEIJING – Pollution in Beijing was so bad Friday the U.S. Embassy, which has been independently monitoring air quality, ran out of conventional adjectives to describe it, at one point saying it was “crazy bad.”

The embassy later deleted the phrase, saying it was an “incorrect” description and it would revise the language to use when the air quality index goes above 500, its highest point and a level considered hazardous for all people by U.S. standards.

The hazardous haze has forced schools to stop outdoor exercises, and health experts asked residents, especially those with respiratory problems, the elderly and children, to stay indoors.

“We’ve canceled 10 days worth of games since August,” said David Niven, chief operating officer of China ClubFootball, which runs extensive youth and adult football leagues in Beijing. “If the air is above 240, some of the schools will ask us to move football games indoors or cancel them altogether. Because of the bad air this year, we’ve had to cancel more games than ever before.”