– Anna Bono: “There’s No Future For Africans In Europe”

– How high demand for chocolate is wiping out Africa’s rainforests:

It would take some serious searching to find someone who does not love chocolate. Who can resist a chocolate bar after a long and stressful day? Or what about some delicious chocolate ice-cream in the sweltering summer heat? Chocolate milkshake anyone? The list goes on and on, and it is true to say that the whole of the developed world is crazy about chocolate. Interestingly, statistics show that in developing countries, one of the first things people start demanding is chocolate, with increases in sales often leaping by 25 percent at a time. All things considered, chocolate seems like a delicious, affordable, innocent indulgence. Unfortunately, nothing could be further from the truth.

The Guardian recently reported that the world’s demand for chocolate has continued to boom at the expense of West Africa’s rainforest, in particular the Ivory Coast, which got its name from the elephants that once freely roamed the area. Protected parks and forests are being denuded at an alarming rate, endangering the chimpanzees and remaining elephants who live there, all in the name of cocoa production.

Alliances continue to be made ahead of #WW3. Just as they were before the first world war.https://t.co/oWoxdS1EkS

Under the draft agreement, Russia and Niger will interact in the war on terror, exchange information on military and political issues and the issues of strengthening international security

MOSCOW, August 10. /TASS/. Russia plans to sign a military cooperation deal with the Republic of Niger in West Africa, including interaction in the war on terror and measures to strengthen international security, according to a Russian government resolution published on the government’s legal information web portal on Thursday. 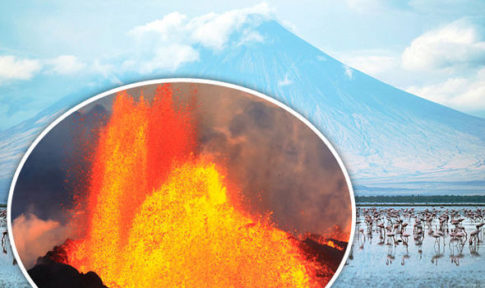 A VOLCANO known as the Mountain of God could be about to erupt sparking fears it could destroy important archaeological sites.

Scientists studying the tremors of the volcano have warned it may blow ‘any second’, destroying the invaluable sites forever.

The 7,650ft volcano, also known as Ol Doinyo Lengai, is less than 70 miles from where footprints left by our ancestors 3.6 million years ago were found.

It is also close to a spot where 400 human footprints from 19,000 years ago were discovered by scientists.

“Here we go again, with the current favourite.
Note how the outbreak is once again within striking distance of the WHO/CIA/MI6/French SS Pandemic Disease Research Labs all over the area .”

–Henry Kissinger Quotes On Depopulation And …

Clinical trials of the world’s first malaria vaccine are scheduled to begin next year in three African countries – Kenya, Ghana and Malawi – but a number of questions remain regarding the vaccine’s efficacy and whether or not the program is actually part of a globalist-funded depopulation campaign.

Despite decades of fighting the disease through a variety of methods, malaria still claims nearly half a million victims per year – 92 percent of them in Africa. Most of the deaths occur among children.