Skip to content
The controversial deal orchestrated by the Federal Reserve that pushed Bear Stearns into the hands of JPMorgan Chase, at the height of the sub-prime crisis, will turn into billions of dollars in gains for for JPMorgan Chase. 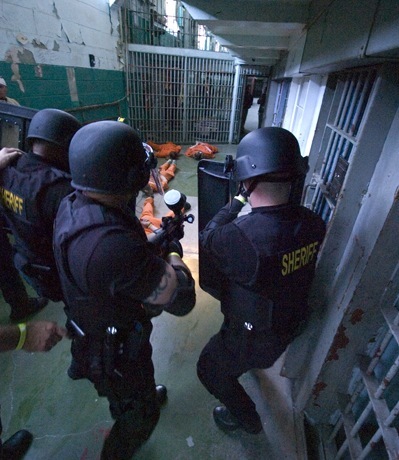 Pretty soon, cops won’t just be packing stun guns. They’ll be carrying electrically-charged riot shields, zapping their unruly without unholstering their weapons. That is, if the folks at Taser International have their way.

The kit “features a peel and stick perforated [f]ilm, power supply and necessary conversion equipment. This laminate becomes electrified providing a powerful deterrent to protect officers and keep suspects or rioters at bay.” What could possibly go wrong?

Taser is demoing all kinds of gear this week — from shock-inducing shotgun rounds to “area denial” zappers that can fry groups of people at once. It’s all part of the Office of Law Enforcement Technology Commercialization’s Mock Prison Riot, a showcase for new police and correctional tech, held annually at on the grounds of the former West Virginia Penitentiary in Moundsville. (David Axe covered the so-called “Rage in the Cage” for DANGER ROOM last year.)

The peel-and-stick zapping film will be available towards the end of the year, the company says. Our buddy Lew Page, over at El Reg, wonders, “Whatever’s next? Electrified body-armour suits? Gauntlets? Truly, the day of the electric cop would seem to be upon us.”

And we can think of lots of other things one might do with this sort of Taser-on-a-roll technology. Troublesome dogs or drunks relieving themselves against your wall? People keep touching your car? Borrowing your stuff? Cover it in peel-and-stick zappercoat (with a car-key-style remote disarm as required), plug it in and watch the fun (and lawsuits) begin.

Gold’s precipitous tumble from its record-high of $1,038 set on March 17 down to the recent $850 level has lots of people asking, “Is gold’s bull market over?”

My answer: No! Not by a long shot!

I know you’ve been getting an earful from the talking-head ninnies about how the long-running commodity bull is getting short of breath and is about to be put out to pasture. Ignore them.

Other than a pullback here and there, gold — and virtually all natural resource prices — are headed much higher in the months and years ahead.

Those numbers should come as no surprise. I’ve mentioned them several times before. Why I am I so bullish?

I’m not going to get into all the arguments that clearly spell higher prices for gold. You’ve heard them from me time-and-time again.

Instead, I’m going to point out something you’ve probably never thought about when it comes to gold. Heck, even the smartest guys on Wall Street haven’t figured it out yet …

Gold Is In A “Win-Win” Situation!

Read moreThe Only “Win-Win” Investment I know of …

WASHINGTON — A German graduate student in oceanography at M.I.T. applied to the Transportation Security Administration for a new ID card allowing him to work around ships and docks.

What the student, Wilken-Jon von Appen, received in return was a letter that not only turned him down but added an ominous warning from John M. Busch, a security administration official: “I have determined that you pose a security threat.”

Similar letters have gone to 5,000 applicants across the country who have at least initially been turned down for a Transportation Worker Identification Credential, an ID card meant to guard against acts of terrorism, agency officials said Monday. 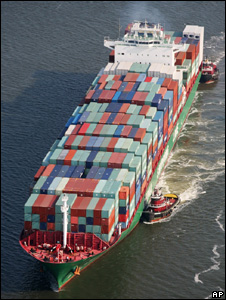 The vast majority of international cargo is transported by sea

US researchers say they have developed an effective way to kill unwanted plants and animals that hitch a ride in the ballast waters of cargo vessels.

Tests showed that a continuous microwave system was able to remove all marine life within the water tanks.

The UN lists “invasive species” dispersed by ballast water discharges as one of the four main threats to the world’s marine ecosystems.

The findings will appear in the journal Environmental Science and Technology.

Shipping moves more than 80% of the world’s commodities and transfers up to five billion tonnes of ballast water internationally each year, data from the UN shows.

(Microwaves from your cellphone destroy your brain. – The Infinite Unknown)

Scientists have created what is believed to be the first genetically modified (GM) human embryo.

A team from Cornell University in New York produced the GM embryo to study how early cells and diseases develop. It was destroyed after five days.

The British regulator, the Human Fertilisation and Embryology Authority (HFEA), has warned that such controversial experiments cause “large ethical and public interest issues”.

News of the development comes days before MPs are to debate legislation that would allow scientists to use similar techniques in this country.

The effects of changing an embryo would be permanent. Genes added to embryos or reproductive cells, such as sperm, will affect all cells in the body and will be passed on to future generations.

The technology could potentially be used to correct genes which cause diseases such as cystic fibrosis, haemophilia and even cancer. In theory, any gene that has been identified could be added to embryos.

Ethicists warn that genetically modifying embryos could lead to the addition of genes for desirable traits such as height, intelligence and hair colour.

The Human Fertilisation and Embryology Bill, which will have its second reading this week, will make it legal to create GM embryos in Britain.

The 50 U.S. states are holding more than $32 billion worth of unclaimed property that they’re supposed to safeguard for their citizens. But a “Good Morning America” investigation found some states aggressively seize property that isn’t really unclaimed and then use the money — your money — to balance their budgets.

Banks and other businesses are required to turn that property over to the state for safekeeping. The problem is that the states return less than a quarter of unclaimed property to the rightful owners.

“I was appalled,” Ruff said. “I felt violated.”

Unknown? Carla’s name was right on documents in the box at the Noe Valley Bank of America location. So was her address — a house about six blocks from the bank. Carla had a checking account at the bank, too — still does — and receives regular statements. Plus, she has receipts showing she’s the kind of person who paid her box rental fee. And yet, she says nobody ever notified her.

“They are zealously uncovering accounts that are not unclaimed,” Ruff said.

To make matters worse, Ruff discovered the loss when she went to her box to retrieve important paperwork she needed because her husband was dying. Those papers had been shredded.

And that’s not all. Her great-grandmother’s precious natural pearls and other jewelry had been auctioned off. They were sold for just $1,800, even though they were appraised for $82,500.

“These things were things that she gave to me,” Ruff said. “I valued them because I loved her.”

Bank of America told ABC News it deeply regrets the situation and appreciates the difficulty of what Mrs. Ruff was going through. The bank has reached a settlement with Ruff and continues to update its unclaimed property procedures as laws change.

Ruff is not alone. Attorney Bill Palmer represents her and countless other citizens in a class action lawsuit against the state of California.

She addressed a UN Meeting on issue of environment: