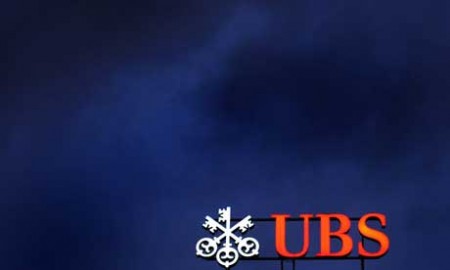 UBS has underlined its status as one of the biggest losers in the credit crunch by announcing £5.1bn of fresh writedowns and its fourth quarterly loss in a row.

The Swiss bank said this morning that it made a net loss of 358m Swiss francs (£173m) in the second quarter of this year. The loss was caused by its continuing exposure to the US housing market, and a huge outflow of funds as wealthy individuals took their money elsewhere.

The new writedowns push UBS’s total since the crisis started to $42bn, bringing it closer to Citigroup ($47bn) and Merrill Lynch ($46bn). 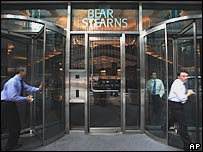 Aug. 11 (Bloomberg) — On March 11, the day the Federal Reserve attempted to shore up confidence in the credit markets with a $200 billion lending program that for the first time monetized Wall Street’s devalued collateral, somebody else decided Bear Stearns Cos. was going to collapse.

In a gambit with such low odds of success that traders question its legitimacy, someone wagered $1.7 million that Bear Stearns shares would suffer an unprecedented decline within days. Options specialists are convinced that the buyer, or buyers, made a concerted effort to drive the fifth-biggest U.S. securities firm out of business and, in the process, reap a profit of more than $270 million.

Whoever placed the bet used so-called put options that gave purchasers the right to sell 5.7 million Bear Stearns shares for $30 each and 165,000 shares for $25 apiece just nine days later, data compiled by Bloomberg show. That was less than half the $62.97 closing price in New York Stock Exchange composite trading on March 11. The buyers were confident the stock would crash.

“Even if I were the most bearish man on Earth, I can’t imagine buying puts 50 percent below the price with just over a week to expiration,” said Thomas Haugh, general partner of Chicago-based options trading firm PTI Securities & Futures LP. “It’s not even on the page of rational behavior, unless you know something.”

“That trade amounted to buying a lottery ticket,” said Michael McCarty, chief options and equity strategist at New York-based brokerage Meridian Equity Partners Inc. “Would you buy $1.7 million worth of lottery tickets just because you could? No. Neither would a hedge fund manager.” 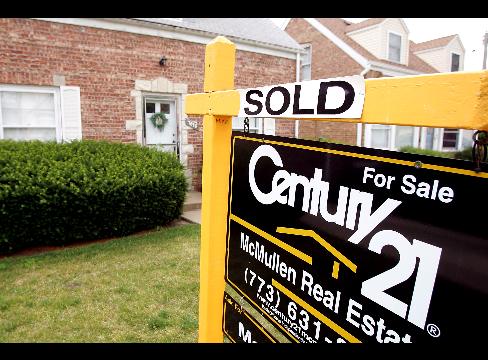 Aug. 12 (Bloomberg) — Almost one-third of U.S. homeowners who bought in the last five years now owe more on their mortgages than their properties are worth, according to Zillow.com, an Internet provider of home valuations.

Second-quarter home prices fell 9.9 percent from a year earlier, giving 29 percent of owners negative equity, said Zillow, the Seattle-based service that offers values for more than 80 million homes. For those who bought at the 2006 peak of the housing market, 45 percent are now underwater, Zillow said. 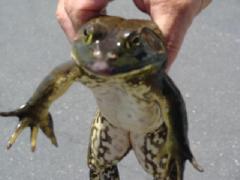 China is set to overtake the US next year as the world’s largest producer of manufactured goods, four years earlier than expected, as a result of the rapidly weakening US economy.

The great leap is revealed in forecasts for the Financial Times by Global Insight, a US economics consultancy. According to the estimates, next year China will account for 17 per cent of manufacturing value-added output of $11,783bn and the US will make 16 per cent.

Read moreChina to overtake US as largest manufacturer

U.S. personnel responsible for training members of the Georgian military remain stationed inside the volatile country, where fighting erupted Friday between Russia and Georgia over the breakaway province of South Ossetia.

The U.S. European Command said on Monday that there were no plans at this time to withdraw the U.S. military trainers from the country. There are still 127 U.S. trainers in Georgia, where the American forces had been preparing the Georgian army for operations in Iraq.

Meanwhile, U.S. civilians started to make their way out of the country over the weekend, according to the U.S. Embassy in Tbilisi.

Video from the the past 18 years on McCain’s relationship with lobbyists.

Iran’s Defense Minister Mohammad-Najjar has warned that its response to a surprise enemy attack would be a greater surprise for the aggressor.

He said Iran has developed an extensive defense force to repel any possible attack, adding the Islamic Republic is currently a major defensive power.

WASHINGTON (AP) – The Federal Reserve has auctioned another $25 billion in loans to the nation’s banks and given them more time to pay the money back in an effort to combat a serious credit squeeze.

The Fed announced Tuesday that the money would be loaned at a rate of 2.754 percent. In the latest auction, the Fed offered the loans for an extended period of 84 days, rather than the 28-day period for the previous loans.

It marked the Fed’s latest attempt to be innovative in providing the nation’s banking system with the cash it needs to combat a serious credit crisis stemming from mounting mortgage loan losses.

(NaturalNews) A moderate increase in fitness level can decrease a man’s risk of dying by between 50 and 70 percent, according to a study conducted by the Exercise Testing and Research Lab at the Veterans Affairs Medical Center in Washington, and published in the journal Circulation.

“It is important to emphasize that it takes relatively moderate levels of physical activity – like brisk walking – to attain the associated health benefits,” said researcher Peter Kokkinos. “Certainly, one does not need to be a marathon runner. This is the message that we need to convey to the public.”

Researchers studied more than 15,000 male U.S. veterans, 6,749 black and 8,911 white. The men had been given standardized treadmill tests, in which they were encouraged to walk until they were tired, then monitored for an average of 7.5 years each.