Taiwanese technology giant Foxconn will replace some of its workers with 1 million robots in three years to cut rising labor expenses and improve efficiency, said Terry Gou, founder and chairman of the company, late Friday.

The robots will be used to do simple and routine work such as spraying, welding and assembling which are now mainly conducted by workers, said Gou at a workers’ dance party Friday night.

The company currently has 10,000 robots and the number will be increased to 300,000 next year and 1 million in three years, according to Gou.

“As such, it is perhaps the most promising tool for behavioral change to have come along in decades.” 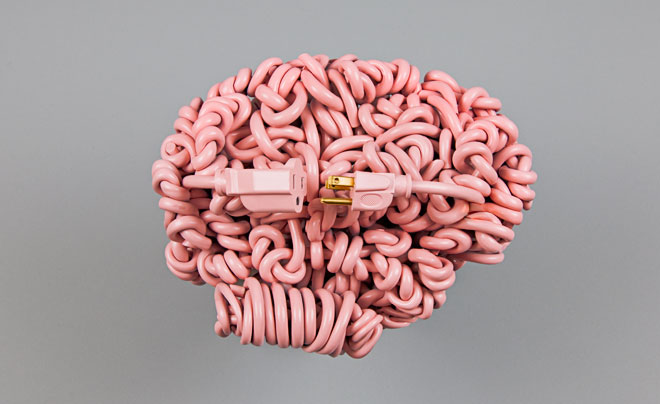 The premise of a feedback loop is simple: Provide people with information about their actions in real time, then give them a chance to change those actions, pushing them toward better behaviors. Photo: Kevin Van Aelst

In 2003, officials in Garden Grove, California, a community of 170,000 people wedged amid the suburban sprawl of Orange County, set out to confront a problem that afflicts most every town in America: drivers speeding through school zones.

Local authorities had tried many tactics to get people to slow down. They replaced old speed limit signs with bright new ones to remind drivers of the 25-mile-an-hour limit during school hours. Police began ticketing speeding motorists during drop-off and pickup times. But these efforts had only limited success, and speeding cars continued to hit bicyclists and pedestrians in the school zones with depressing regularity.

So city engineers decided to take another approach. In five Garden Grove school zones, they put up what are known as dynamic speed displays, or driver feedback signs: a speed limit posting coupled with a radar sensor attached to a huge digital readout announcing “Your Speed.”

– Big Brother is watching you: The town where EVERY car is tracked by police cameras (Daily Mail, July 30, 2011):

A sleepy Home Counties market town has become the first in Britain to have every car passing through it tracked by police cameras.

Royston, in Hertfordshire, has had a set of police cameras installed on every road leading in and out of it, recording the numberplate of every vehicle that passes them.

The automatic number-plate recognition system will check the plates against a variety of databases, studying them for links to crimes, and insurance and tax records, and alerting police accordingly.

There were just seven incidents of vehicle crime in the town last month, and residents believe the unmarked cameras are an invasion of their privacy.

The system, due to be switched on in the next few days, also allows police to compile ‘hotlists’ of vehicles that they are interested in and which will be flagged up when the ANPR system

Read moreBig Brother UK: The Town Where EVERY Car Is Tracked By Police Cameras

Researchers at U.C. Berkeley have discovered that some of the net’s most popular sites are using a tracking service that can’t be evaded — even when users block cookies, turn off storage in Flash, or use browsers’ “incognito” functions.

The service, called KISSmetrics, is used by sites to track the number of visitors, what the visitors do on the site, and where they come to the site from — and the company says it does a more comprehensive job than its competitors such as Google Analytics.

Internet providers would be forced to keep logs of their customers’ activities for one year–in case police want to review them in the future–under legislation that a U.S. House of Representatives committee approved today.

The 19 to 10 vote represents a victory for conservative Republicans, who made data retention their first major technology initiative after last fall’s elections, and the Justice Department officials who have quietly lobbied for the sweeping new requirements, a development first reported by CNET.

A last-minute rewrite of the bill expands the information that commercial Internet providers are required to store to include customers’ names, addresses, phone numbers, credit card numbers, bank account numbers, and temporarily-assigned IP addresses, some committee members suggested. By a 7-16 vote, the panel rejected an amendment that would have clarified that only IP addresses must be stored.

It represents “a data bank of every digital act by every American” that would “let us find out where every single American visited Web sites,” said Rep. Zoe Lofgren of California, who led Democratic opposition to the bill.

…which is of course the most important thing in life!

New standards for long range wireless networks have been published today by the IEEE.

The 802.22 standard for Wireless Regional Area Networks (WRANs) means that broadband access can be provided over long distances, up to 100 kilometres.

This will mean that rural areas could more easily benefit from broadband access, with developing countries targeted by the IEEE.

In the state of Wisconsin, you may be denied the ability to vote for lack of sufficient recent “bank activity”. A woman surreptitiously filmed the interactions as her 18-year-old son leaps through hurdle after hurdle in an attempt to get a constitutionally-guaranteed state ID so that he could vote. At the DMV, the pair is told that voter IDs were not issued when voters’ bank accounts did not show enough “activity.” The clerk had no answer when asked what would happen in the case of a resident who was homeless or unemployed, or too poor to maintain the minimum balance required for a checking account.