The Defense Department has announced a new get-tough policy with colleges and universities that interfere with the work of military recruiters and Reserve Officer Training Corps programs.

Under rules that will take effect April 28, defense officials said they want the exact same access to student directories that is provided to all other prospective employers. 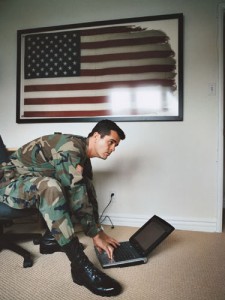 “Al-Qaeda, in its haven in western Pakistan, is training operatives who are ‘western’ in appearance, making it easier for them to get past U.S. airport security, Central Intelligence Director Michael Hayden said,” reports Bloomberg.

Does anybody who looks “western” have an easy time getting past airport security? Mr. Hayden needs to visit an airport and see for himself — just about everybody, from grandmothers to toddlers, are under suspicion, even if they look Scandinavian. It has nothing to do with actual suspicion. It has to do with sending a message: you live in a police state now, get used to it, and if you don’t want to end up dead in a holding cell like Carol Ann Gotbaum, you’ll submit and not complain.

Of course, Mr. Hayden, as the head honcho of the CIA, is “catapulting the propaganda,” as Bush might call it. Now that al-Qaeda operatives look like stock brokers and cashiers at the local Stop ‘n Gas, we need to push ahead with the control grid, now only partially in place. Our rulers think we need to hear this kind of nonsense every few weeks, just to remind us and get us accustomed to those CCTV cameras everywhere and the NSA vacuuming up our telephone conversations and emails. It’s all to protect us from the white boy al-Qaeda.