A top official warned of widening loan fraud in 2004, but the agency focused its resources elsewhere. 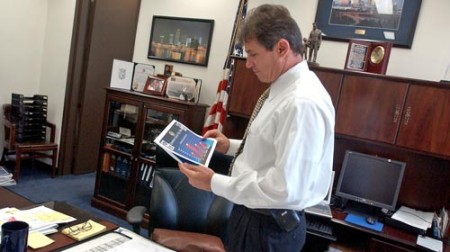 WASHINGTON — Long before the mortgage crisis began rocking Main Street and Wall Street, a top FBI official made a chilling, if little-noticed, prediction: The booming mortgage business, fueled by low interest rates and soaring home values, was starting to attract shady operators and billions in losses were possible.

“It has the potential to be an epidemic,” Chris Swecker, the FBI official in charge of criminal investigations, told reporters in September 2004. But, he added reassuringly, the FBI was on the case. “We think we can prevent a problem that could have as much impact as the S&L crisis,” he said.

Today, the damage from the global mortgage meltdown has more than matched that of the savings-and-loan bailouts of the 1980s and early 1990s. By some estimates, it has made that costly debacle look like chump change. But it’s also clear that the FBI failed to avert a problem it had accurately forecast.

Regulator, insurer boosts its staff and provisions as it faces its biggest challenge in decades

ATLANTA – The Federal Deposit Insurance Corp. is one of those agencies with a low profile but essential role similar to plumbing or electricity – you don’t notice it until the power’s out or the basement’s flooding.

These days, the FDIC’s folks are busier with the financial equivalent of fixing burst water mains and dead power lines.

Seventy-five years after it was launched during the Great Depression, the bank regulator and insurer is facing its biggest challenge in decades. Many banks in Georgia and across the nation have been battered by the slumping economy and troubled loans to home builders, developers and homeowners.

Hundreds could fail, some industry experts predict. That could force the agency to make good on its promise to insure most customers’ checking and savings deposits up to $100,000 and some retirement accounts up to $250,000, putting pressure on its insurance fund.

BERLIN, Aug 22 (Reuters) – Germany’s Bundesbank on Friday rejected calls that it should sell some of its gold reserves to help boost the slowing German economy, telling Reuters financial and political uncertainty make the reserves even more important than before.

“Gold sales are not a suitable way to sustainably consolidate the public accounts,” the Bundesbank said after a query about trade union proposals that it sell gold to fund some of a 25 billion euro ($37 billion) economic stimulus package.
“National gold reserves have a confidence and stability-building function for the single currency in a monetary union. This function has become even more important given the geopolitical situation and the risks present in financial market developments.”

The Bundesbank is the world’s second-largest holder of gold after the U.S. Federal Reserve, and has sold just 20 tonnes out of total reserves of over 3,000 tonnes in the past five years.

The U.S. automakers and the suppliers want Congress to appropriate $3.75 billion needed to back $25 billion in U.S. loans approved in last year’s energy bill and add $25 billion in new loans over subsequent years, according to people familiar with the strategy. The industry is also seeking fewer restrictions on how the funding is used, the people said today.

GM and Ford lost $24.1 billion in the second quarter as consumers, battered by record gasoline prices, abandoned the trucks that provide most of U.S. companies’ profit and embraced cars that benefit overseas competitors such as Honda Motor Co. U.S. auto sales may drop to a 15-year low this year and fall even more in 2009, analysts have said.

Aug. 23 (Bloomberg) — Columbian Bank and Trust Co. of Topeka, Kansas, was closed by U.S. regulators, the nation’s ninth bank to collapse this year amid bad real-estate loans and writedowns stemming from a drop in home prices.

The bank, with $752 million in assets and $622 million in total deposits, was shuttered by the Kansas state bank commissioner’s office and the Federal Deposit Insurance Corp., the FDIC said yesterday in a statement.

For years, the data contained in the weekly Commitment of Traders Report (COT), issued by the CFTC, have indicated that several large COMEX traders have manipulated the price of silver and gold. For an equal number of years, the CFTC has reluctantly responded to public pressure over this issue with blanket denials of any wrongdoing. Many analysts have agreed with the CFTC’s position, conjuring up various ways to explain why a massive short position held by a handful of traders is not manipulative.

The recent widespread shortage of silver for retail purchase coupled with a price collapse appears to have shaken these analysts’ confidence that the COMEX silver market is operating ‘fair and square.’ Well it should, since there is no rational explanation for a significant price decline going hand in hand with product shortages other than collusive manipulation.

For any remaining doubters that COMEX silver and gold pricing is manipulated, the following CFTC data should be considered. This data is taken from a monthly report issued by the CFTC, called the Bank Participation Report. Here’s the link for the report:

http://www.cftc.gov/marketreports/bankparticipation/index.htm The relevant data is found in the July and August futures sections. I will condense it. 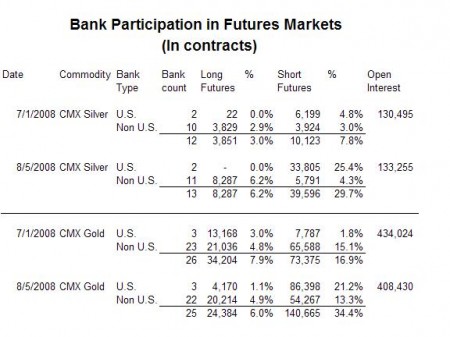 Aug. 22 (Bloomberg) — A failure of U.S. mortgage finance companies Fannie Mae and Freddie Mac could be a catastrophe for the global financial system, said Yu Yongding, a former adviser to China’s central bank.

“If the U.S. government allows Fannie and Freddie to fail and international investors are not compensated adequately, the consequences will be catastrophic,” Yu said in e-mailed answers to questions yesterday. “If it is not the end of the world, it is the end of the current international financial system.”

Freddie and Fannie shares touched 20-year lows yesterday on speculation that a government bailout will leave the stocks worthless. Treasury Secretary Henry Paulson won approval from the U.S. Congress last month to pump unlimited amounts of capital into the companies in an emergency. 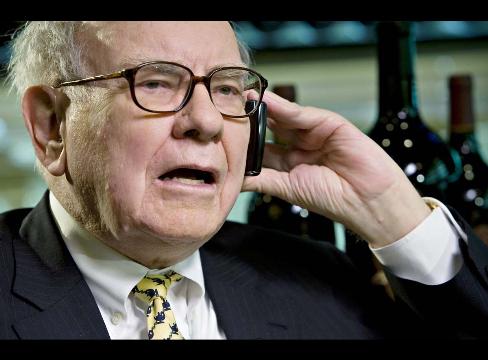