– The Dark Origins of the Davos Great Reset:

Important to understand is that there is not one single new or original idea in Klaus Schwab’s so-called Great Reset agenda for the world. Nor is his Fourth Industrial Revolution agenda his or his claim to having invented the notion of Stakeholder Capitalism a product of Schwab. Klaus Schwab is little more than a slick PR agent for a global technocratic agenda, a corporatist unity of corporate power with government, including the UN, an agenda whose origins go back to the beginning of the 1970s, and even earlier. The Davos Great reset is merely an updated blueprint for a global dystopian dictatorship under UN control that has been decades in development. The key actors were David Rockefeller and his protégé, Maurice Strong.

In the beginning of the 1970s, there was arguably no one person more influential in world politics than the late David Rockefeller, then largely known as chairman of Chase Manhattan Bank.

At the end of the 1960s and into the early 1970s, the international circles directly tied to David Rockefeller launched a dazzling array of elite organizations and think tanks. These included The Club of Rome; the 1001: A Nature Trust, tied to the World Wildlife Fund (WWF); the Stockholm United Nations Earth Day conference; the MIT-authored study, Limits to Growth; and David Rockefeller’s Trilateral Commission.

In 1971 the Club of Rome published a deeply-flawed report, Limits to Growth, which predicted an end to civilization as we knew it because of rapid population growth, combined with fixed resources such as oil. The report concluded that without substantial changes in resource consumption, “the most probable result will be a rather sudden and uncontrollable decline in both population and industrial capacity.” It was based on bogus computer simulations by a group of MIT computer scientists. It stated the bold prediction, “If the present growth trends in world population, industrialization, pollution, food production, and resource depletion continue unchanged, the limits to growth on this planet will be reached sometime within the next one hundred years.” That was 1971. In 1973 Klaus Schwab in his third annual Davos business leader meeting invited Peccei to Davos to present Limits to Growth to assembled corporate CEOs.

In 1974, the Club of Rome declared boldly, “The Earth has cancer and the cancer is Man.” Then: “the world is facing an unprecedented set of interlocking global problems, such as, over-population, food shortages, non-renewable resource [oil-w.e.] depletion, environmental degradation and poor governance.” They argued that,

‘horizontal’ restructuring of the world system is needed…drastic changes in the norm stratum – that is, in the value system and the goals of man – are necessary in order to solve energy, food, and other crises, i.e., social changes and changes in individual attitudes are needed if the transition to organic growth is to take place.

In their 1974 report, Mankind at the Turning Point, The Club of Rome further argued:

Increasing interdependence between nations and regions must then translate as a decrease in independence. Nations cannot be interdependent without each of them giving up some of, or at least acknowledging limits to, its own independence. Now is the time to draw up a master plan for organic sustainable growth and world development based on global allocation of all finite resources and a new global economic system.

That was the early formulation of the UN Agenda 21, Agenda2030 and the 2020 Davos Great Reset.

By far the most influential organizer of Rockefeller’s ‘zero growth’ agenda in the early 1970s was David Rockefeller’s longtime friend, a billionaire oilman named Maurice Strong. Canadian Maurice Strong was one of the key early propagators of the scientifically fraudulent theory that man-made CO2 emissions from transportation vehicles, coal plants and agriculture caused a dramatic and accelerating global temperature rise which threatens “the planet”, so-called Global Warming.

As chairman of the 1972 Earth Day UN Stockholm Conference, Strong promoted an agenda of population reduction and lowering of living standards around the world to “save the environment.” Strong stated his radical ecologist agenda: “Isn’t the only hope for the planet that the industrialized civilizations collapse? Isn’t it our responsibility to bring that about?” This is what is now taking place under cover of a hyped global pandemic.

Strong was a curious choice to head a major UN initiative to mobilize action on the environment, as his career and his considerable fortune had been built on exploitation of oil, like an unusual number of the new advocates of ‘ecological purity,’ such as David Rockefeller or Robert O. Anderson of Aspen Institute or Shell’s John Loudon.

Strong had met David Rockefeller in 1947 as a young Canadian high school dropout of eighteen and from that point, his career became tied to the network of the Rockefeller family. Through his new friendship with David Rockefeller, Strong, at age 18, was given a key UN position under UN Treasurer, Noah Monod. The UN’s funds were conveniently enough handled by Rockefeller’s Chase Bank. This was typical of the model of “public-private partnership” to be deployed by Strong—private gain from public government.

By 1989 Strong was named by the UN Secretary General to head the 1992 UN Conference on Environment and Development or UNCED (“Rio Earth Summit II”). He oversaw the drafting of the UN “Sustainable Environment” goals there, the Agenda 21 for Sustainable Development that forms the basis of Klaus Schwab’s Great Reset, as well as creation of the Intergovernmental Panel on Climate Change (IPCC) of the UN. Strong, who was also a board member of Davos WEF, had arranged for Schwab to serve as a key adviser to the Rio Earth Summit.

As Secretary General of the UN Rio Conference, Strong also commissioned a report from the Club of Rome, The First Global Revolution, authored by Alexander King which admitted that the CO2 global warming claim was merely an invented ruse to force change:

“The common enemy of humanity is man. In searching for a new enemy to unite us, we came up with the idea that pollution, the threat of global warming, water shortages, famine and the like would fit the bill. All these dangers are caused by human intervention, and it is only through changed attitudes and behavior that they can be overcome. The real enemy then, is humanity itself.”

President Clinton’s delegate to Rio, Tim Wirth, admitted the same, stating, “We have got to ride the global warming issue. Even if the theory of global warming is wrong, we will be doing the right thing in terms of economic policy and environmental policy.” (Elaine Dewar, Cloak of Green: The Links between key environmental groups, government and big business, Toronto, James Lorimer & Co., 1995, pp. 259-265. )

At Rio Strong first introduced the manipulative idea of “sustainable society” defined in relation this arbitrary goal of eliminating CO2 and other so-called Greenhouse Gases. Agenda 21 became Agenda 2030 in Sept 2015 in Rome, with the Pope’s blessing, with 17 “sustainable” goals. It declared among other items,

“Land, because of its unique nature and the crucial role it plays in human settlement, cannot be treated as an ordinary asset, controlled by individuals and subject to the pressures and inefficiencies of the market. Private land ownership also is a principal instrument of accumulation and concentration of wealth and therefore contributes to social injustice…Social justice, urban renewal, and development, the provision of decent dwellings and healthy conditions for the people can only ‘be achieved if land is used in the interests of society as a whole.”

In short private land ownership must become socialized for “society as a whole,” an idea well-known in Soviet Union days, and a key part of the Davos Great Reset.

At Rio in 1992 where he was chairman and General Secretary, Strong declared:

“It is clear that current lifestyles and consumption patterns of the affluent middle class— involving high meat intake, consumption of large amounts frozen and convenience foods, use of fossil fuels, appliances, home and work place air-conditioning, and suburban housing — are not sustainable.” (emphasis added)

Strong did not heed his own call. What Strong did not tell his environmentalist allies at Rio was that he had also made a huge purchase of the Colorado Land and Cattle Company, from Saudi arms dealer and CIA asset, Adnan Khashoggi.

By that time Strong was at the very center of the transformation of the UN into the vehicle for imposing a new global technocratic fascism by stealth, using dire warnings of planet extinction and global warming, merging government agencies with corporate power in an unelected control of pretty much everything, under the fraudulent cover of “sustainability.” In 1997 Strong oversaw creation of the action plan following the Earth Summit, The Global Diversity Assessment, a blueprint for the roll out of a Fourth Industrial Revolution, an inventory of every resource on the planet, how it would be controlled , and how this revolution would be achieved.

At this time Strong was co-chairman of Klaus Schwab’s Davos World Economic Forum. In 2015 on Strong’s death, Davos founder Klaus Schwab wrote, “He was my mentor since the creation of the Forum: a great friend; an indispensable advisor; and, for many years, a member of our Foundation Board.”

Before he was forced to leave the UN in disgrace over an Iraq Food-for-Oil corruption scandal, Strong was member of the Club of Rome, Trustee of the Aspen Institute, Trustee of the Rockefeller Foundation and Rothschild Foundation. Strong was also a director of the occult Temple of Understanding of the Lucifer Trust (aka Lucis Trust) housed at the Cathedral of St. John the Divine in New York City, “where pagan rituals include escorting sheep and cattle to the alter for blessing. Here, Vice President Al Gore delivered a sermon, as worshippers marched to the altar with bowls of compost and worms…” xvi

This is the dark origin of Schwab’s Great Reset agenda where we should eat worms and have no private property in order to “save the planet.” The agenda is dark, dystopian and meant to eliminate billions of us “ordinary humans.”

F. William Engdahl is strategic risk consultant and lecturer, he holds a degree in politics from Princeton University and is a best-selling author on oil and geopolitics, exclusively for the online magazine Global Research Centre for Research on Globalization 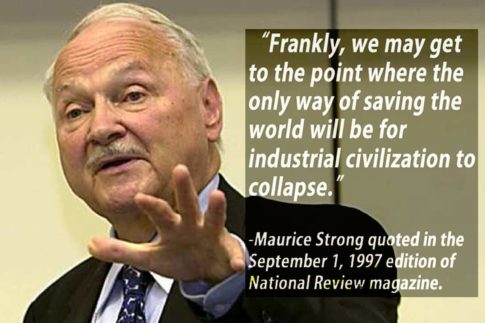