– Former Chairman of the Royal College of Physicians and Surgeons committee in Ottawa Dr. Roger Hodkinson on COVID: “This is the Biggest Hoax ever perpetrated on an Unsuspecting Public” 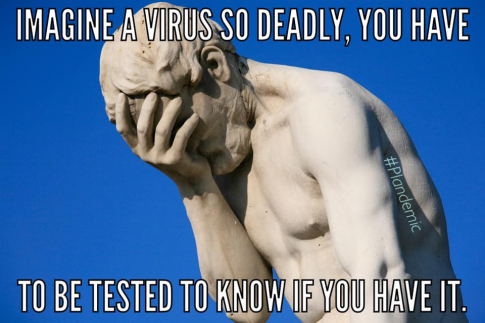 “We’re following the scientific advice,” say western governments as they enforce these, their second nationwide lockdowns in fewer than 8 months. Well, the science has now definitely advised, but is anyone following…?

At the start of the year, if you asked members of the public “should we implement face masks/lockdowns to fight a particularly nasty strain of flu?”, their answers would generally be along the lines of “of course not” and “I’ll accept the risk”. Today, however, as the calendar flips to November, the results of a highly effective brainwashing campaign are on show, and a-scared-out-of-their-wits majority (or is it a noisy scared-out-of-their-wits minority?) are now in full favor of such oppressive, economy-wrecking measures, believing them to be key to their survival despite there being ZERO scientific backing behind them.

These “useful idiots” are even calling for wider and stricter measures. In the UK, for example, school’s aren’t due to close in this latest round of restrictions –enforced on Nov 5– a decision the nation’s teaching unions have evocatively labeled a “deadly mistake”. Such useful idiots have merely been scared, not informed. How do people think the human race has survived thus far? We build immunity against a flu virus, by getting it, no profiteering vaccine required.

Of the 750million people the World Health Organisation says have been infected by the virus to date, almost none have been reinfected.

Furthermore, although COVID-19 is new, coronavirus strains are not. What is never pointed out is that many who have been infected by other coronaviruses in the past have successfully built an immunity to closely related ones, such as COVID-19. Multiple research groups in Europe and the US have shown that around 30% of the population was already immune to COVID-19 before the virus even arrived — a fact that government advisors continue to ignore. In the UK, that equates to more than 20million people. Adding to this, the latest data reveals that 33.5% of the population has already been infected by COVID-19. And once you then factor in that a tenth of the UK population is aged ten or under (and so therefore largely invulnerable), that leaves about 26.5% of people who are actually susceptible to being infected: “That’s a far cry from [the UK gov’s] current prediction of 93%,” writes Dr. Mike Yeadon, who has a degree in biochemistry and toxicology and a research-based PhD in respiratory pharmacology.

Dr. Yeadon goes on to contextualize the UK’s death toll, writing that the pandemic is being presented as “the biggest public health emergency in decades, when in fact mortality in 2020 so far ranks eighth out of the last 27 years. The death rate at present is also normal for the time of year — the number of respiratory deaths is actually low for late October,” he points out.

So, not only not only is this virus less dangerous than we are being led to believe, with almost three quarters of the population at no risk of infection, we’re actually very close to achieving herd immunity.

The science has spoken

Echoing this reality is the Great Barrington Declaration, co-authored by three professors from Oxford, Harvard and Stanford universities — dismissed as ‘emphatically false’ by UK politicians, yet signed by more then 44,000 scientists, public health experts, and clinicians so far, including Nobel Prize winner Dr Michael Levitt.

The declaration states: “Current lockdown policies are producing devastating effects on short and long-term public health. The results (to name a few) include lower childhood vaccination rates, worsening cardiovascular disease outcomes, fewer cancer screenings and deteriorating mental health – leading to greater excess mortality in years to come, with the working class and younger members of society carrying the heaviest burden. Keeping students out of school is a grave injustice. Keeping these measures in place until a vaccine is available will cause irreparable damage, with the underprivileged disproportionately harmed.“

The scientists point out that vulnerability to death from COVID-19 is more than a thousand-fold higher in the old and infirm than the young: “Indeed, for children, COVID-19 is less dangerous than many other harms, including influenza.

“As immunity builds in the population, the risk of infection to all – including the vulnerable – falls. We know that all populations will eventually reach herd immunity – i.e.  the point at which the rate of new infections is stable – and that this can be assisted by (but is not dependent upon) a vaccine. Our goal should therefore be to minimize mortality and social harm until we reach herd immunity. The most compassionate approach that balances the risks and benefits of reaching herd immunity, is to allow those who are at minimal risk of death to live their lives normally to build up immunity to the virus through natural infection, while better protecting those who are at highest risk.”

I urge you to read their declaration in full, here.

Governments are ignoring a formidable collective of respected scientific opinion and relying instead on their own deified, yet utterly incompetent advisers–advisers caught in the headlights, and too spineless to stand up for what’s right. In the words of Dr. Yeadon, “I have no confidence in Sage (the UK Gov’s advisory body) – and neither should you – and I fear that, yet again, they’re about to force further decisions that we will look back on with deep regret.”