…and they are pushing the people towards it…

…and sadly they’ll get exactly what they want,

The people going at each others throats,…

…instead of removing those bastards from power…

…once and for all.

“California has not even mailed out ballots yet, and will not mail them until after October 5th so the photos of ballots in the dumpster have to be fake.” ANSWER:

California started mailing out ballots on September 5th, and the deadline for ALL ballots to be mailed is October 5th. They can’t be mailed out after October 5th.

So the same damn Mister Fusion GPS and an army of other trolls are again lying through their teeth and saying they will not even begin to go out until October 5th. OCTOBER 5TH IS IN FACT THE FAR LAST “YOU ARE LATE” DEADLINE ALL DISTRICTS HAVE TO DO IT BY, practically all were sent out in early September.

It is important to know these types of lies are being spewed, lies not even Snopes has the guts to spew, if California had not mailed out ballots yet Snopes would have been ALL OVER IT with their debunk, and instead they said the ballots were from 2018. Snopes may have actually thought they were being honest, it was not easy to figure out there was a bundle of Sep 18 2020 newspapers in the dumpster along with the ballots. – HOWEVER – Will they correct their error? FAT CHANCE.

BOOOOOM! INSIDER CONTACTS HAVE REVEALED TO THIS WEB SITE HOW THE ELECTION WILL BE STOLEN.

Here it is, in a nutshell. Mail sort machines are plugged into the voter records database. When they see a ballot from someone who is not Democrat, the mail sort machine pitches the ballot into a dumpster (like the one you see below on this page). THEN, A RECORD IS MADE BY THE MACHINE ON THE SPOT THAT THE PERSON THE BALLOT BELONGS TO VOTED. SINCE THE BALLOT IS NOW IN THE TRASH, A NEW FAKE BALLOT CAN NOW BE DRAWN UP AND PUT IN IT’S PLACE AND THE MAIL SORT MACHINE ITSELF PROVIDES THE INFORMATION NEEDED TO GO ON THE BALLOT SO THERE ARE NO SCREW UPS. When the voter goes to the polls to see if his mail in vote made it, the answer is YES. And this is precisely why the signatures don’t have to match the actual voter this time, THIS TIME, THEY CANCELED THAT because they can’t get that many ballots correctly faked and put in place of the actual voter this time if they have to worry about signatures matching.

If something is not done about this on time, we’re F***ED, BECAUSE ONE SUCH DUMPSTER, WITH TENS OF THOUSANDS OF BALLOTS HAS ALREADY BEEN BUSTED INTO THE OPEN, AND WHAT THE CONTACTS SAID WOULD HAPPEN MATCHES THIS. THIS INFO DID NOT COME THROUGH THE E-MAIL, IT CAME FROM PEOPLE I KNOW THAT HAVE DIRECT ACCESS TO WHAT IS GOING ON IN THREE DIFFERENT STATES. SEE THE FOLLOWING:

CAN YOU SAY DOOMED? We are DOOMED, I don’t think a miracle can possibly happen with such a contained and corrupted system, especially when they are making sure they get all the time they need to get it “right”. DO NOT VOTE BY MAIL, DO NOT DO IT.

This ended up being a HELL OF A LOT WORSE than ballots in a dumpster, it is that PLUS opposite votes being cast in their place. WE ARE DOOMED.

For those of you who have not seen this, there is now proof that the tens of thousands of ballots that arrived at a California landfill were indeed 2020 mail in ballots for Trump.

This is getting censored after scammers convinced a lot of people that the photos were from 2018. But there was a Sep 2020 newspaper in the trash with them that has been identified.

Get this over to the Gateway Pundit, I have the proof they are looking for.

MORE IMPORTANT THAN THE ADRENOCHROME POST: (AND THIS HAS BEEN PROVEN AFTER SNOPES DEBUNKED IT:) PROVEN: AFTER SEPTEMBER 18 2020, TENS OR HUNDREDS OF THOUSANDS OF MAIL IN BALLOTS FOR TRUMP MAIL SORTED AND THEN FOUND BY WHISTLEBLOWER AT LANDFILL.

They are trying to claim the following image is a hoax and that these ballots were dumped years ago. PROBLEM: THE RED ARROW POINTS TO A BUNDLE OF “THE COMMUNITY VOICE” PAPERS DATED SEPTEMBER 18 2020 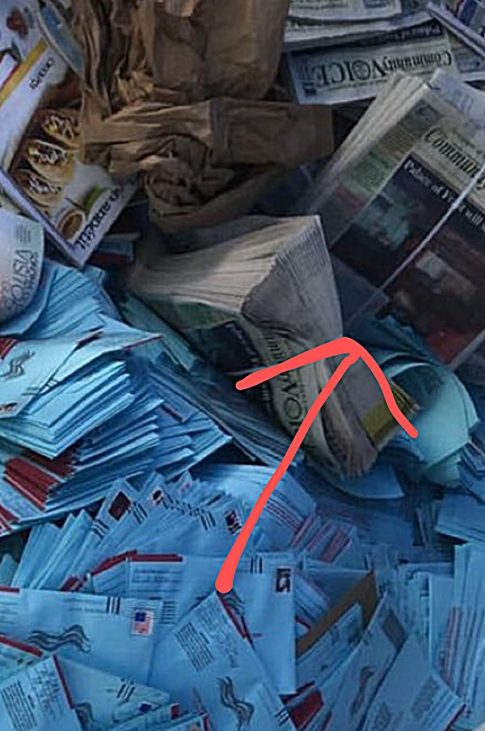 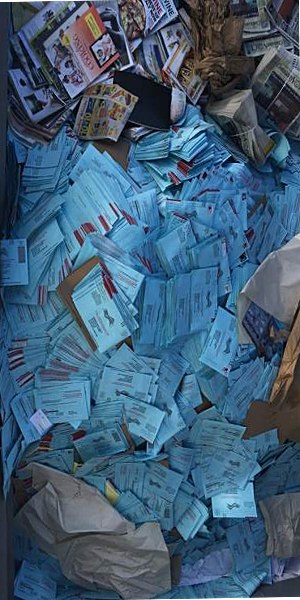 Here is a capture of that paper as it appears online. The page is double dated, for the current day AND when this article originally posted. and that is a godsend because it will prevent the election stealers from claiming the date is wrong. 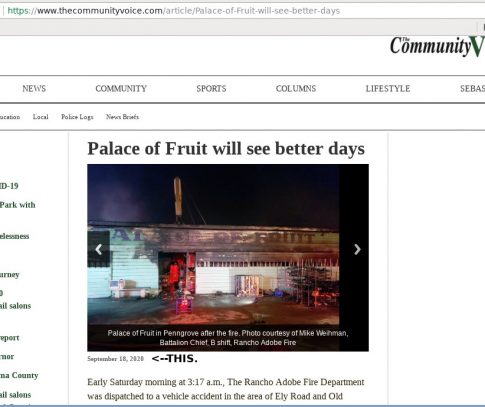 For clarity I cropped the capture above in to the date of the report section of the page, the entire page that shows both dates (to prove it’s not a date error on that site because I know those stealing the election will claim that) – the entire page with both dates is HERE and will also be at the link above until someone scolds that paper and has them remove this. That might not work however, because that paper is so current lots of people might still have one laying around to photograph and post.

OBVIOUS: They are using the mail sort machines to locate the “bad ballots” and dispose of them, that’s the only way so many that had been mailed in could have ended up in the same dumpster.

THAT’S RIGHT FOLKS: THEY ARE USING THE MAIL SORT MACHINES TRUMP WANTED SHUT DOWN (TO SECURE THE MAIL IN VOTE) – THEY ARE USING THEM TO SEPARATE OUT ALL OF TRUMP’S VOTES BY MERGING VOTER AND ADDRESS DATABASES TO THROW TRUMP’S VOTES IN THE TRASH UPDATE: NOT ONLY ARE THE BALLOTS GOING IN THE TRASH, IT IS NOW CONFIRMED THAT THE MAIL SORT MACHINES THEMSELVES ARE PROGRAMMED TO TELL WHO’S BALLOTS GOT THROWN AND PROVIDE ALL DATA TO BE FILLED IN ON A FAKED REPLACEMENT BALLOT.

This ended up being a HELL OF A LOT WORSE than ballots in a dumpster, it is that PLUS opposite votes being cast in their place. WE ARE DOOMED. I have repeatedly stated for the past 10 years that America’s mail sort machines have had the ability to find and remove anyone’s mail from the system since 1991, by using OCR software to read the text on the envelope and put mail addressed to someone they were interested in down it’s own chute. This system went into place and was masked as a “barcode assist” system. Now we have an entire semi sized dumpster full of mail in ballots that were thrown there AFTER September 18 2020, PROVEN by the September 18 2020 edition of the Community Voice and the only way that could happen is via a rigged mail sort machine.

AAHHH, Snopes got onto this one quick with their usual bullshit. 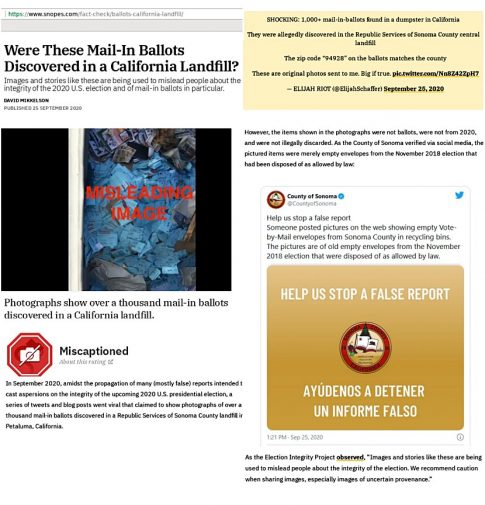 Look at that Snopes debunk good and close. Read it 5 times. THAT is how we are going to be lied to when they steal this election, Snopes got the county and an “election integrity” organization to lie STRAIGHT FACED about what those ballots were, a lie laid bare by a CURRENT paper in the dumpster along with them.

THE ELECTION WILL BE STOLEN. THIS IS BEING EXPUNGED AND I AM LEAVING THIS HERE HOPING TO GOD A LEGIT ELECTION INTEGRITY TASK FORCE LAUNCHED BY TRUMP WILL SEE IT.

Project Veritas did a report on ballot harvesting in Minneapolis, and while that’s important, it pales in comparison to using mail sort machines to automatically trash the ballots for Trump by the (probable) millions.