National Security Adviser suggested today that sanctions & protests have Iran “choked off”, will force them to negotiate. Actually, I couldn’t care less if they negotiate. Will be totally up to them but, no nuclear weapons and “don’t kill your protesters.”

So Netanyahu, who has been lying about nonexistent nukes in #Iran for almost 30 years, and who deceived the US about #Iraq’s WMDs, also lied about Israel’s involvement in the murder of Soleimani. 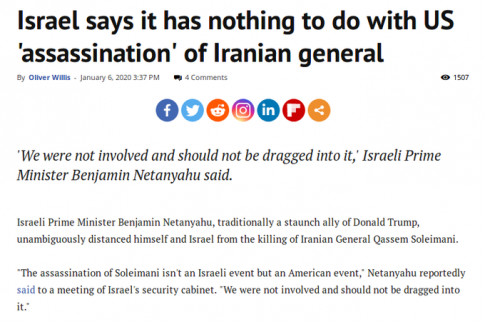 The Trump administration is digging a big WMD hole for itself, one lie at the time https://t.co/EprlJ5WrzU

ISIS praises US murder of Iranian general Soleimani as ‘divine intervention’ that will help them rise again https://t.co/LXNiiV0dwk pic.twitter.com/VTXnUbUN4Q

Hedge Fund CIO: Will The Fed Ever Be Held Accountable For Turbocharging Inequality That Poisons America https://t.co/YacFIkO9Bg

Much more than just regime change is planned and coming…

'Regime change is in the air': US establishment seeks to capitalize on Iranian protests… again https://t.co/ZLRi5RaiIq#Iran #USA

Today was the 61st consecutive Saturday of #GiletsJaunes #YellowVest protests against #Macron in #France.

Mainstream media nowhere to be found of course.
As usual… pic.twitter.com/D7mnYkTX2P

WHO chief caught on camera lying to the public about vaccines – disgusting https://t.co/MoKGvOj7Sw pic.twitter.com/gySVpNozwP

#Breaking: The Ninoy Aquino International Airport in #Manila, has suspended all of their flights today duo to the ash cloud of the #Taal volcano in the #Philippines. pic.twitter.com/gcQKDTuM9X

adjective
(of a person or their behavior) primarily concerned with making money at the expense of ethics.

noun
a professional soldier hired to serve in a foreign army https://t.co/lf6yucOwPo

Israeli delusion is comical. They fund and support ISIS; even give them medical treatment; yet, like their Hollywood brethren, sell fantasies that are opposite of reality to create this illusion of alliance with ANY country other than their own. https://t.co/bj1a4VNzTJ

"Do Not Kill Your Protesters" – Trump Warns Iran As Crackdown On Growing Protests Begins https://t.co/htdICHFBRa

This will surely end well…

One of the worst examples of wasted taxpayer money I've seen in recent years.

This was the "Christmas lighting" put up by the city of #Athens #Greece this year. It cost hundreds of thousands dollars.

Apparently they were convinced to do something "artsy" this year

When the receipt falls out your pocket… pic.twitter.com/FALLuC0loZ

Source: #Qatar's Emir Sheikh Tamim bin Hamad Al Thani carried to #Iran #Tehran a clear message from the #US: De-escalation on all fronts and that the US have no intention to stay in #Iraq for very long.
Iran answered that @realDonaldTrump can't be trusted & more.. pic.twitter.com/L5Nb9ayUQs

“The green friend is waiting for your hands!” Soviet poster, 1960 pic.twitter.com/ZLyfpvbWLx

In Era Of Big Tech Censorship, Big Pharma Intoxication, & Big Government Surveillance, Soleimani's Death A "Win" For No One https://t.co/4LXRXm3cPj

Powell In 2014: "A Large Balance Sheet Might Prove A Magnet For Trouble Over Time" https://t.co/HjTIG1Fs9F

In less than 20 years, the LGBT movement went from "we just want to be left alone in the privacy of our bedrooms" to "what we do in our bedrooms must be taught to children". https://t.co/ObOG3oJM09

Must read thread on the seemingly spontaneous #protests that occured in #Iran today.
Protestors seemed very organised and prepared at such short notice. https://t.co/DnWAdPUSMz

"The Other 1 Percent": Morgan Stanley Spots A Market Ratio That Is "Unprecedented Even During The Tech Bubble" https://t.co/xU26DA11n6

The Politics Behind Banning Russia From The Olympics https://t.co/l0W27HzLhM