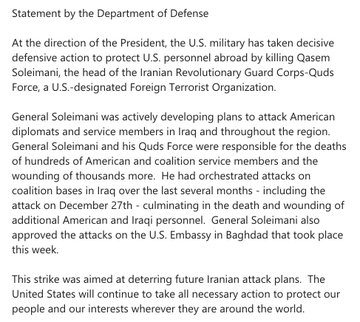 BREAKING: ‘Act of international terrorism’: Iran vows ‘vigorous revenge’ on #US after Quds Force chief killed in US airstrike#Soleimanihttps://t.co/IXHk4bvJbJ pic.twitter.com/CQRikVpUwc

The Pentagon confirmed the US carried out the airstrike on thr Baghdad airport that killed
Qasem #Soleimani, head of the elite Quds Force. The Pentagon says the strike came "at the direction of the President." And it was
“aimed at deterring future Iranian attack plans” pic.twitter.com/v1FV8aQNU1

Killing Qassem #Soleimani – the strategic mastermind behind the crushing of ISIS and Al-Qaeda in #Iraq, Syria and Lebanon – and setting the stage for a disastrous war with #Iran isn’t America First, nor Making America Great Again… It’s Israel First. Full-stop. https://t.co/8ZteSy3Bz3

A war with #Iran – which is what the US murder of #Soleimani may trigger – will leave millions of innocents dead and displaced not only within Iranian borders, but across the Middle East.

Nobody benefits from such a catastrophe except Israel and its neocon auxiliaries in the US.

If the US and Israel think that the extrajudicial killing of Qassem #Soleimani will be a contained event, they couldn’t be more mistaken. #Iran is not Iraq or Libya.

This is beyond frightening.

Iraqi State TV is reporting that the US killed IRGC Quds Force chief Qassem #Soleimani – the man who helped defeat ISIS in Syria and #Iraq – in an illegal strike on #Baghdad Airport tonight.

This is a catastrophic escalation that very well could mean war between the US and Iran.

A senior Pentagon official confirmed to Newsweek that Muhandis was indeed killed, along with Quds Force commander Qassem #Soleimani, pending DNA results that had a "high probability" of identifying the two men as the targets.