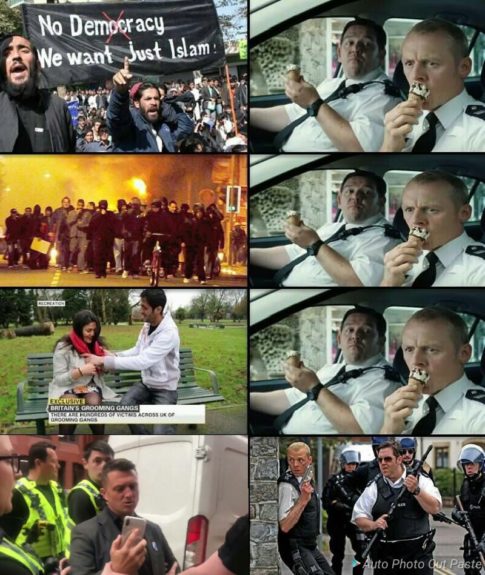 Tommy Robinson arrested for ‘breach of the peace’ after chasing down accused child abusers https://t.co/DfKCslBmLf

Today Tommy Robinson was arrested and sentenced to 13 months in jail for the simple act of reporting on the grooming gang situation in Britain.

I wrote about the police’s history of abusing their powers with Tommy Robinson here https://t.co/CxPI0OHH3g pic.twitter.com/1IKmFltzyb

“Hey, he wasn’t really sentenced to 13 months for it. He was out of a suspended sentence for something else and being charged with that crime means he has to serve the remainder.”

Luckily archives are forever. Here’s the story if you haven’t seen it yet.https://t.co/vhkNpBUy6B pic.twitter.com/WpZgnD3MkN

Media stories are being SUPPRESSED.

Again here’s an archive of the story THAT WAS DELETED. https://t.co/lETdZLibxn pic.twitter.com/8RczEt3Lpd

Nobody archived it in time to save the piece but it still shows up via Google searchhttps://t.co/lJ84UxdWTU pic.twitter.com/jLytPoKcaT

Dear @lizziedearden . You wrote about the arrest of Tommy Robinson and yet your article is still up. Above me in this thread are four examples of articles being removed across different sites.

Why is the Independent seemingly exempt from this? https://t.co/IGwjHYPHzj pic.twitter.com/Xm8axxhPfi

UPDATE 6: “Who still has articles up?” (in the UK area where reporting restrictions were enacted, apparently)

Sending Tommy Robinson to jail is a death sentence and the UK knows this. It was acknowledged in the court room.

Tommy warned us about these rape gangs.

You laughed and called him a racist

Tommy will die in prison at the hands of these gangs.

You will laugh and say it served him right

Then you will remember YOU have a daughter #TommyRobinson https://t.co/CkT9s3UA5i

Arrested for “breaching the peace” while reporting on a Islamic grooming gang trial?

Has the United Kingdom become a police state?

The U.K., it seems, has become a safer place for grooming gangs than it is for the people who report on/expose them. #FreeTommy

The truth is illegal, telling jokes is grossly offensive and illegal but grooming gangs roam the country freely for years because it might be considered racist to do something about it. The absolute state of the UK!

2 thoughts on “Tommy Robinson arrested for ‘breach of the peace’ after chasing down accused child abusers – Breitbart, Russia Today, Mirror and ‘Birmingham Live’ Take Down Articles About Tommy Robinson’s Arrest”