...as predicted here at I. U.  before the election.

“… the Donald has in effect declared himself to be the middle east’s Spanker-in-Chief, promising to annihilate Iran for doing exactly what Ike had in mind… By turning the US war machine into an auxiliary operative in Bibi Netanyahu’s political machine, the Donald has put the Deep State First like never before.”

– Israeli Airstrike In Syria Was “Most Extensive Attack In Decades”:

In what is now being described as the “most direct confrontation between Israel and Iran in decades,” Israel exchanged fire with Syrian and Iranian forces during a late-night showdown that ended early Thursday morning.

The exchange came days after Israel called up reserve troops to the Golan Heights, the disputed border region.

It also followed by less than two days President Trump’s decision to pull the US out of the Iran deal. Trump said Tuesday that the US would swiftly reimpose economic sanctions on Iran that had been lifted following the 2015 agreement.

According to Syrian media, some 28 Israeli aircraft fired around 60 air-to-surface missiles at Syria during the exchange. Iranian lawmakers have denied the IDF’s claims that Iranian forces in Syria provoked Israel by firing on their positions in the Golan Heights border area.

Israel also launched roughly 10 surface-to-surface missiles, which struck military targets near Damascus and in Southern Syria, according to the Russian military.

In the aftermath of one of the most severe Israeli attacks on Syria “in decades,” Iranian lawmakers said Thursday that Iran had no role in the attack, and that Shia nation doesn’t operate any bases in Syria.

Mohammad Javad Jamali Nobandegani, a member of the Iranian Parliament’s national security and foreign policy committee, said Israel’s claim that Iran had provoked Israel by firing first was “a lie,” adding that “Israel’s history of carrying out unprovoked attacks in Syria has been well-documented.“

When I read about a Russian Jet buzzing a US Navy surveillance plane within 20 feet, I thought it was hyperbole.

Flashback: On record: Benjamin Netanyahu: ‘America is something that can easily be moved.’ ‘The world won’t say a thing.’ ‘The world will say we’re defending.’ (VIDEO)

And now the Balkans? I. U. readers know why this is important:

When Washington Think Tanks Call for ‘Action’ in the Balkans, Expect Troublehttps://t.co/kUt4tm17SL

– Merkel: “Europe Can No Longer Rely On The US To Protect It”

Farage reveals the KEY point that shows Brussels will NOT survive https://t.co/dOye2x6Pet

– Another Step Towards Collapse Of The Petrodollar

– Watch CIA Veteran, 78, Get Dragged Out Of Haspel Confirmation And Tackled By Capitol Police

– Avenatti Exposed: Stormy’s Lawyer May Face Disbarrment, Legal Action As Past Catches Up

Yes, he’s an Freemason and an Illuminati puppet, just like Killary Clinton….

– Assad: Why talk to Trump if he doesn’t control the US?

…and they are very good friends… 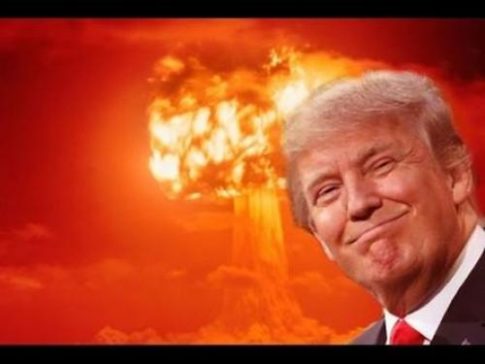