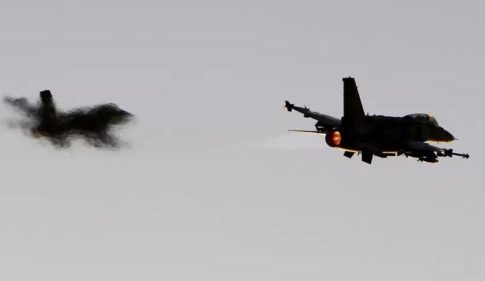 – Israel Vows To “Wipe Assad Off The Map” If Iran Launches An Attack From Syrian Territory:

After they launched a lethal strike (from Lebanese airspace, no less) against the T-4 airforce base in Syria in retaliation for the a chemical weapons attack on a rebel-held Syrian village – killing several Iranians in the process – senior Israeli officials have finally confirmed what many have long assumed since the country started escalating its military operations within the borders of its crumbling Levantine neighbor.

That is, if Israel even so much as suspects that Iranian agents are planning an attack against Israel from Syrian territory, it will be Syrian President Bashar al-Assad who ends up on the receiving end of a preemptive strike from the IDF, per the Jerusalem Post.

“If the Iranians act against Israel from Syrian territory, Syrian President Bashar Assad and his regime will be those that pay the price.”

The aggressive rhetoric from senior officials in the IDF comes after Iran’s Supreme Leader Ali Khamenei referred to Israel’s attack on the T-4 air base as “Israel’s crime” and threatened that it “would not remain without a response.”

However, IDF officials are literally threatening to “wipe Assad off the map.”

“Assad’s regime and Assad himself will disappear from the map and the world if the Iranians do try to harm Israel or its interests from Syrian territory,” said senior officials in the defense establishment.

“Our recommendation to Iran is that it does not try to act, because Israel is determined to continue on this issue to the very end,” the officials said.

Israeli Defense Minister Avigdor Liberman said Tuesday that Israel would take “all necessary steps” to stop Iran from establishing a permanent military base in Syria.

“No matter what the price, we will not allow Iran to have a permanent [military] foothold in Syria. We have no other choice,” Liberman said.

Israeli officials believe Iran might try to retaliate either with Syrian weapons or by transporting Iranian arms to Syria.

Officials also expressed their hope that Lebanese militant group Hezbollah wouldn’t be drawn into a potential conflict between Israel, Syria and Iran – though we imagine that outcome would probably be inevitable.

“We hope that Hezbollah Secretary-General Hassan Nasrallah will not join and be drawn into the campaign if it breaks out,” senior security officials told The Jerusalem Post’s sister newspaper Maariv on Tuesday.

“We have no interest in widening the front but, should it happen, Nasrallah needs to understand that his fate will be no different from the fate of Assad and he will pay a very heavy price.”

Israeli officials on Tuesday said they were confident US President Donald Trump would stand by his comments referring to a possible American strike in Syria, in response to another use of chemical weaponry by Assad’s forces against his own citizens.

Meanwhile, Russia vetoed a UN Security Council resolution on Tuesday to launch an investigation into the alleged chemical attack in Syria after the US admitted it has “no evidence” the attack was carried out by the regime. A US strike in Syria is widely expected, and the White House is expected to announce its plans for retaliation later today after UN Ambassador Nikki Haley promised the US would resort to unilateral action if the Russians blocked their way at the security council.