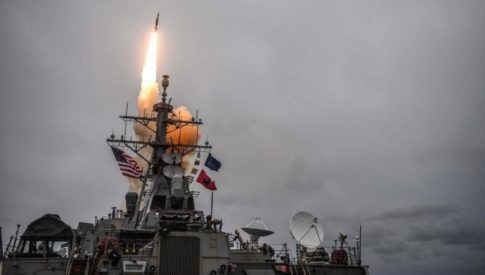 As the situation in Syria continues to escalate, guided missile destroyer USS Donald Cook has weighed anchor off Syrian territorial waters, and is reportedly being “harassed” by low-flying Russian warplanes, which have buzzed the “Arleigh Burke” class warship at least four times according to CNN Turk.

Of note, the Donald Cook has 60 Tomahawk cruise missiles on board. 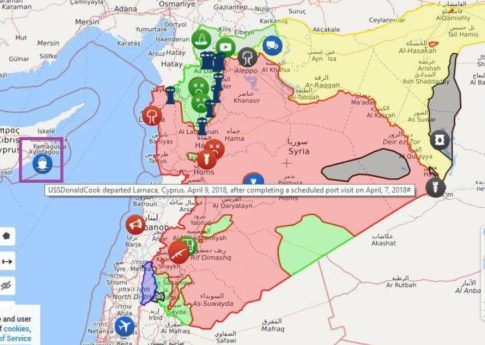 A Navy source confirmed the deployment with the Washington Examiner, who said that the guided-missile-destroyer had just completed a port call in Cyprus, while the Pentagon reportedly draws up plans for how to deal with the situation.

U.S. military planners have drawn up more than one option for possible military action against Syria, including a strike similar to last year’s attack in which 59 sea-launched cruise missiles inflicted heavy damage on a Syrian Air Force airfield in Homs.

Pentagon officials, speaking on condition of anonymity, said the options now are similar to those presented to President Trump after last year’s chemical attack in northern Syria that killed and injured hundreds of civilians, including women and children.

But officials said the president could decide to choose a more robust option this time, given that Syrian President Bashar Assad didn’t seem to get the message last time. –Washington Examiner

What is surprising is that according to the latest Stratfor naval map, there was no other major naval support – either amphibious or carrier strike groups – in the vicinity of Syria as of April 5. 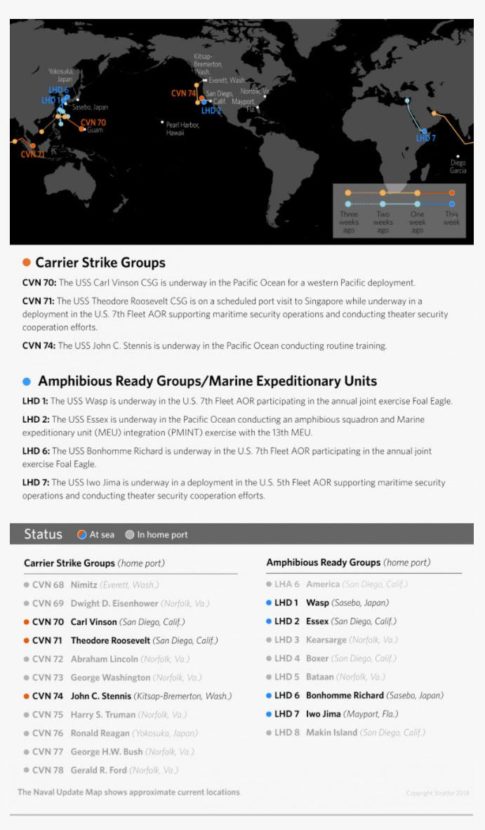 The IDF has long noted the T-4 base for its housing of Iranian and Quds forces with the backing of Syria.

For a long time Iran and the Quds Force have been operating, with the backing of Syrian forces and the approval of the Syrian regime, from the Syrian T-4 Airbase near Tadmor. pic.twitter.com/U9H33vDF4O

US Defense Secretary Jim Mattis told reports on Monday “I don’t rule out anything right now,” when asked about a potential response – noting Russia’s alleged involvement.

“The first thing we have to look at is, why are chemical weapons still being used at all when Russia was the framework guarantor of removing all the chemical weapons?” he said. “And so, working with our allies and our partners from NATO to Qatar and elsewhere, we are going to address this issue.”

Last year, the U.S. warned the Kremlin ahead of the strike so that Russia could make sure its planes and personnel in Syria were not in harm’s way.

This time, the Foreign Ministry in Moscow has issued an explicit warning to Washington that any “military intervention” in Syria would be “unacceptable” and would lead to the “most serious consequences.”

The U.S. acted alone in April last year, but this time it could work through a coordinated international response. –Washington Examiner

Britain and France have also hinted at possible military action in Syria – following comments by British Foreign Secretary, who spoke by phone with French Minister for Foreign Affairs, Jean-Yves Le Drian on Monday, saying that there should be “no impunity for those that use such barbaric weapons,” in reference to the gas attack.

Speaking to reporters at a Monday cabinet meeting, President Trump said he would be making a decision “very quickly, probably by the end of today” about the U.S. response.

#BREAKING
Information about the #USA destroyer USS Donald Cook carrying #Tomahawk missiles, which was anchored near the coast of #Cyprus, is moving towards the #Syria-n coast.
It seems that the next 48 hours will be hot in the eastern Mediterranean.#Russia #Iran #France #Israel pic.twitter.com/rO9NzhKrcV

Meanwhile, Russia appears to be making preparations for an imminent, US-led attack and according to unconfirmed reports, there have been “intensive flights of Russian aircrafts along the Syrian coast & over Khmeimim base, in addition to the intense flights of military aircrafts belonging to the Assad regime in the sky of Homs. There is great anticipation from Assad and Russia for a possible blow.”

#BREAKING
now intensive flights of Russian aircrafts along the Syrian coast & over Khmeimim base, in addition to the intense flights of military aircrafts belonging to the Assad regime in the sky of Homs. There is great anticipation from Assad and Russia for a possible blow.#USA pic.twitter.com/isYVMsosje