For the last two years we have documented the rapid ascent of Sweden’s cashless society as government’s demands for ever greater control over “you, the people’s” money combined with the ‘ease-of-use’ narrative has left many stores no longer accepting cash at all  and even sparked anxiety among Swedish authorities  that:

“If this development with cash disappearing happens too fast, it can be difficult to maintain the infrastructure” for handling cash.“

Last year, the amount of cash in circulation in Sweden dropped to the lowest level since 1990 and is more than 40 percent below its 2007 peak. The declines in 2016 and 2017 were the biggest on record. 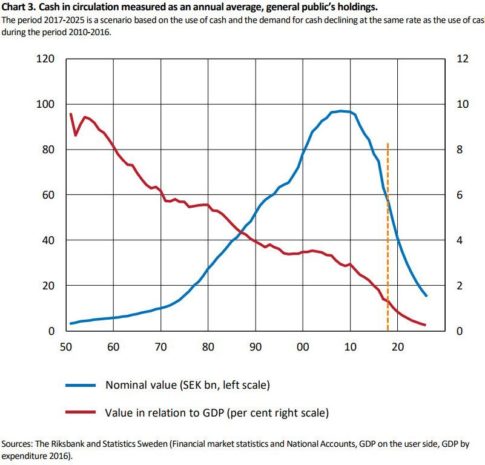 But the pace at which cash is vanishing has authorities worried.

“One may get into a negative spiral which can threaten the cash infrastructure,” Mats Dillen, the head of the parliamentary review, said.

“It’s those types of issues we are looking more closely at.”

And now, as The Guardian reports, a small but growing number of Swedes anxious about their country’s rush to embrace a cash-free society.

While many large western nations have that nagging doubt in the back of their mind that government may not be all-virtuous, Swedes – until now – have not…

“The Swedish government is a rather nice one, we have been lucky enough to have mostly nice ones for the past 100 years,” says Christian Engström, a former MEP for the Pirate Party and an early opponent of the cashless economy.

“In other countries there is much more awareness that you cannot trust the government all the time. In Sweden it is hard to get people mobilised.”

…but there are signs this might be changing. Following discussions by the country’s central bank, concerns about a cash-free society have emerged into the mainstream, says Björn Eriksson, 72, a former national police commissioner and the leader of a group called the Cash Rebellion, or Kontantupproret.

As The Guardian reports, until now, Kontantupproret has been dismissed as the voice of the elderly and the technologically backward, Eriksson says.

“When you have a fully digital system you have no weapon to defend yourself if someone turns it off,” he says.

“If Putin invades Gotland [Sweden’s largest island] it will be enough for him to turn off the payments system. No other country would even think about taking these sorts of risks, they would demand some sort of analogue system.”

In this sense, Sweden is far from its famous concept of lagom – “just the right amount” – but instead is “100% extreme”, Eriksson says, by investing so much faith in the banks.

“This is a political question. We are leaving these decisions to four major banks who form a monopoly in Sweden.”

The best case scenario is that we are not as secure as we think, Mattias Skarec, 29, a digital security consultant, says – the worst is that IT infrastructure is systemically vulnerable.

“We are lucky that the people who know how to hack into them are on the good side, for now,” he says. “But we don’t know how things will progress. It’s not that easy to attack devices today, but maybe it will become easier to do so in the future.”

The Pirate Party – which made its name in Sweden for its opposition to state and private sector surveillance – welcomes a higher political profile for these issues, according to The Guardian. Look at Ireland, Christian Engström says, where abortion is illegal. It is much easier for authorities to identify Irish women who have had an abortion if the state can track all digital financial transactions, he says. And while Sweden’s government might be relatively benign, a quick look at Europe suggests there is no guarantee how things might develop in the future.

“In the meantime, we will have to keep giving our money to the banks, and hope they don’t go bankrupt – or bananas.” 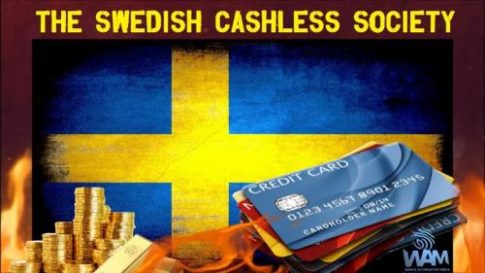 Finally, by way of ironic reminder, here is the 360 year history of Sweden’s experiment with paper currency:

In 1660, Sweden’s Riksbank was the first central bank in the world to issue paper currency.

In 2016, Sweden began to accelerate its transition from cash to digital currency.

“We need to do the homework because it’s not an option for the public sector to stay on the sidelines and see the private sector cut off access to central bank money for individuals.”

A year later, in 2017, cash in circulation was plummeting and establishment economists celebrated the battle in the war on cash.

At the start 2018, Swedish officials are worried that too much (or too little in this case) is a bad thing warning:

“If this development with cash disappearing happens too fast, it can be difficult to maintain the infrastructure” for handling cash.

As Bloomberg reports, Sweden is widely regarded as the most cashless society on the planet. Most of the country’s bank branches have stopped handling cash; many shops, museums and restaurants now only accept plastic or mobile payments.

But there’s a downside, since many people, in particular the elderly, don’t have access to the digital society.

And now, in April 2018, the people are growing concerned at the loss of control and vulnerability to cyber-attack… forcing a return to ‘paper’.  An opinion poll this month revealed unease among Swedes, with almost seven out of 10 saying they wanted to keep the option to use cash, while just 25% wanted a completely cashless society.

But then again, when did the will or the views of the public count for anything?

If you have any misguided notion that a cashless society is not coming, just keep telling yourself that every time you use a debit card, credit card or your phone for your next purchase. With the elimination of cash we effectively hand over our individual human sovereignty to the banks and the government.