Saudi Arabia’s crown prince Mohammed bin Salman (MbS) admitted in a wide-ranging interview in The Atlantic that Saudi nationals have funded terrorist groups, and quite stunningly – that Israelis are entitled to live peacefully on their own land – yet another indicator that the relationship between Riyadh and Tel Aviv is strengthening.

Bin Salman’s comments come days after a U.S. judge rejected Saudi Arabia’s request to dismiss lawsuits accusing it of involvement in the 9/11 attacks.

The cases are based on the Justice Against Sponsors of Terrorism Act (Jasta), a 2016 law that provides an exemption to the legal principle of sovereign immunity, allowing families of the victims to take foreign governments to court.

The families point to the fact that the majority of the hijackers were Saudi citizens, and claim that Saudi officials and institutions “aided and abetted” the attackers in the years leading up to the 9/11 attacks, according to court documents. –Middle East Eye

MbS also told The Atlantic when asked if Jewish people have a right to a nation-state in at least part of their ancestral homeland:

Saudi Arabia does not currently recognize Israel – maintaining for years that normalizing relations all depends on the withdrawal from Arab lands captured in the 1967 Middle East War – territory Palestinians claim to be theirs for the establishment of a future state.

Behold the “Coalition to fight terrorism” 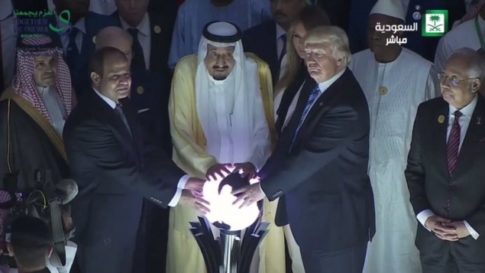 Recall that the first two stops Donald Trump made as President were Saudi Arabia and Israel, where he met with Israeli Prime Minister Benjamin “Bibi” Netanyahu and Saudi Arabia’s King Salman to discuss a coalition to fight terrorism – which, aside from the US and Israel, includes Egypt, Saudi Arabia, Kuwait, the UAE, Bahrain, Oman and Jordan – assembled to fight the Islamic State and curtail Iran’s regional ambitions.

Last November, the 32-year-old bin Salman announced plans to “wipe terrorists from the face of the earth,” by forming a coalition of 40 Muslim countries to defeat ISIS.

Speaking at a summit of defence ministers from across 41 majority-Muslim countries he spoke of a need for a “pan-Islamic united front” against terrorism.

He said: “In past years, terrorism has been functioning in all of our countries… with no coordination among national authorities.

“That ends today, with this alliance.” –express.co.uk

The first official meeting of the new Muslim alliance was held a week later – just two days after an attack at a Mosque in Egypt killed over 300 people, including 30 children – in what was called the country’s worst terrorism incident.

Meanwhile, bin Salman traveled to Washington D.C. in March, where he began what’s been described as a cross-country road show to lure American firms and investment to Saudi Arabia – a crucial component of his “Vision 2030” plan to wean the ultraconservative kingdom’s economy off its reliance on oil.

Since being appointed heir to the thrown, MbS, 32, has embarked on what fawning US media have described as an “ambitious” reform agenda. He has earned-widespread praise for lifting restrictions on women driving while loosening rules around male-female interactions and also reining in the country’s religious police.

In an effort to wean the Kingdom off of its dependence on oil, MbS launched his Vision 2030 initiative – a plan that relies on foreign investment.