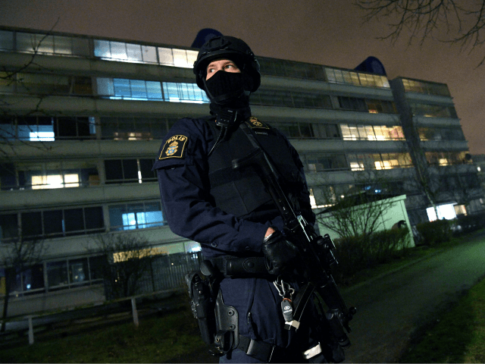 Newly released crime statistics from the Swedish Crime Prevention Council (Brå) show the number of fatal acts of violence in 2017 to be the highest ever recorded by the agency, while the number of rapes has also continued to rise.

Brå released the crime statistics for 2017 this week through the organisation’s website and while the total number of crimes had remained largely the same, rapes and fatal violence had both increased.

According to the report, the number of fatal violent crimes totalled 113, up from 106 in 2016. “The number of cases 2017 is the highest level of reported cases of fatal violence since 2002 when Brå began to compile statistics,” the organisation wrote.

Brå also reported a ten per cent increase in the number of rapes reported for a total of 7,370 cases in 2017. “Of the reported rapes against persons 18 years or older in 2017, 95 per cent were offences against a woman and 5 per cent against a man,” the report reads.

The background of the suspects in the rapes or cases of violence is not published by the organisation though Breitbart London was able to report last year that in gang rapes, men of migrant backgrounds made up nine out of ten individuals convicted. A recent report from the Swedish media confirmed the statistic a year after Breitbart London had first reported it.

Shootings in Sweden have also dramatically increased in recent years. In the city of Helsingborg, the number of shootings increased 300 per cent in 2017 with local police blaming a rise in criminal gang violence.

Grenade attacks, which have been a problem in the city of Malmö for years, have also spread across the country as some claim that hand grenades are widely available and inexpensive.

Police have also been targets of violence in recent months with several explosions and shootings at police stations, the most recent being in the migrant-majority town of Södertälje where ten bullets were shot into a police station that had been unmanned overnight in February.