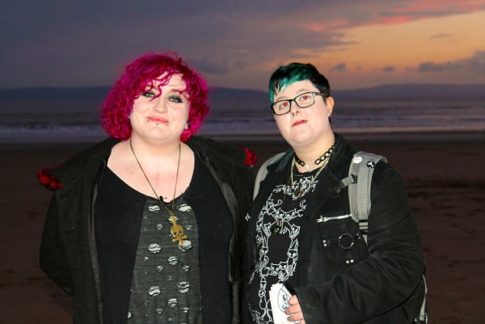 Kai, 27, right, and Franz, 26, left, have both been diagnosed with Disassociative Identity Disorder and have more than 400 different personalities, known as ‘alters’, between them

– Couple with identity disorders who have over 400 personalities between them reveal they sometimes go a day without eating – because their child ‘alter-egos’ don’t know how to COOK:

A couple who both suffer from a multiple personality disorder have revealed the struggle of living with hundreds of competing identities.

Kai, 27, and Franz, 26, who live in Cardiff, have both been diagnosed with Disassociative Identity Disorder and have more than 400 different personalities, known as ‘alters’, between them.

The ‘alters’ range from boisterous children to competent adults and each comes with their own memories, behaviours, attitudes and perceived age.

In 5Star documentary My Multiple Personalities & Me, viewers are shown how Kai and Franz can both ‘switch’ alters several times during a single trip to the supermarket, forcing them to try and appease each one with the shopping list.

According to the Mirror, one of Franz’s alters Grey says: ‘It feels like we are shopping for 1,000 people. Imagine every time you went shopping, you’ve got an entourage of people saying ‘no, yes, no yes’.’

The different identities’ backstories mean the couple can also go a day without eating as the younger ‘alters’ do not know how to cook.

According to the Mayo Clinic, people with the disorder may feel the presence of two of more people talking or living inside their head, and they may feel as though they’re possessed by other identities.

Each identity may have a unique name, personal history and characteristics, including differences in voice, gender, mannerisms and even physical qualities such as the need for eyeglasses.

There are also differences in how familiar each identity is with the others.

For Kai and Franz, these personalities range from children with a perceived age as young as four, to adults in their 30s.

In the documentary, Kai says: ‘There’s been quite a few people who don’t understand it or don’t even think it is real. People say it’s fake and that’s up to them.

‘But it would be a lot of effort to put myself through if it was fake. I would’ve had to be faking this for a really long time.

‘I don’t come out that often, it’s usually other alters that run my life for me and they seem to do a better job than me a lot of the time.

‘Having the comfort of someone else understanding what I am going through and why, and not being upset when I am not around, it makes me feel safer and happier.’

People with DID also often have a history of childhood abuse, generally starting before the age of five.

Kai tells how he suffered from trauma since birth until meeting Franz in 2011. The couple were introduced through an online forum for people living with DID.

Franz explains how she experienced ‘bad things’ as a toddler but she ‘can’t remember much from back then’. Now the couple are both in therapy.

One of their hopes for the future is to be able to work, something that at the moment is impossible with their condition.