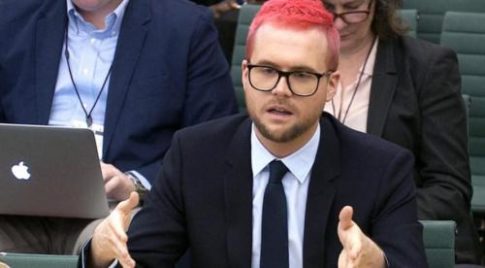 According to Christopher Wylie, the whistleblower behind the Facebook and Cambridge Analytica scandal, we have President Trump to thank for the exposure of Facebook as a data-hording, privacy-busting super-surveillance ‘state’.

Wylie, appearing in front of U.K. lawmakers in London this morning, said that the election of Donald Trump as U.S. president in 2016 made him speak out about the practices being employed by the political data firm.

“I wouldn’t say it was just because of Donald Trump, but Donald Trump makes it click in your head that this actually has a much wider impact. I don’t think that military-style information operations is conducive for any democratic process,” he told the committee of lawmakers.

As CNBC notes, Wylie was the man who revealed to the New York Times and the U.K.’s Observer newspaper the practices of Cambridge Analytica and the data harvesting that took place. He is speaking to members of parliament on the Digital, Culture, Media and Sport (DCMS) Committee, chaired by lawmaker Damian Collins.

Lawmakers questioned Wylie on the links between Cambridge Analytica, its parent company SCL, and work on various political campaigns including Brexit.

In other words, if Hillary had won, the general public would remain oblivious to Facebook’s (and other social media giants) massive data-gathering efforts.. and Mark Zuckerberg would still be the 4th richest person in the world (instead of 8th!).