After a late 1:30 pm start to the hastily organized afternoon press conference, President Donald Trump signed a $1.3 trillion spending measure Friday averting a government shutdown at midnight, acting just hours after saying he was considering a veto. He wasn’t.

Saying he was “unhappy” with the bill, the president explained that while the bill isn’t perfect, it includes several “hard-fought” defense spending increases (the largest on record) which push the defense budget to $700BN, and a pay-hike for the troops. Trump added that he was “forced” to sign the bill for national security reasons, knowing full well the pushback he will get on the right for caving to conservatives on both the wall and the exploding budget.

To offset the anger, Trump emphasized that he would “never sign a bill like this again.” He complained that the legislation does not fully fund his plans for a border wall with Mexico and does not address some 800,000 “Dreamer” immigrants who are now protected from deportation under a program that he has moved to eliminate. He said he signed it in order to provide needed money for the military.

He also said that the Senate needs to get rid of the filibuster – and that Congress should grant him line-item veto power.

Trump had vacillated earlier in the week on whether to support the bill, but promised he would sign it after a meeting with House Speaker Paul Ryan on Wednesday.

Shortly before the press conference, Defense Secretary James Mattis reportedly met with Trump to lobby him to sign the bill, and it would appear his efforts were successful.

Earlier Friday, Trump cast doubt on whether he would back the massive spending bill, saying he was “considering” a veto. Then, adding to the made-for-TV drama, he scheduled a news conference. Telegraphing the outcome, an internal White House television feed advertised the event this way: “President Trump Participates in a Bill Signing.”

I am considering a VETO of the Omnibus Spending Bill based on the fact that the 800,000 plus DACA recipients have been totally abandoned by the Democrats (not even mentioned in Bill) and the BORDER WALL, which is desperately needed for our National Defense, is not fully funded.

With Congress already on recess, Trump had said on Twitter that he was weighing a veto. He said that young immigrants now protected in the U.S. under Barack Obama’s Delayed Action for Childhood Arrivals “have been totally abandoned by the Democrats (not even mentioned in Bill) and the BORDER WALL, which is desperately needed for our National Defense, is not fully funded.”

Several advisers inside and outside the White House had characterized the tweet as Trump blowing off steam.

Trump’s budget director, Mick Mulvaney, said he had been asked to prepare a contingency plan for a shutdown, an ominous sign ahead of the announcement.

Trump’s tweet had been at odds with what top members of Trump’s administration and House Speaker Paul Ryan said Thursday, and with a formal statement of administration policy, which said Trump was supportive of the measure.

It came hours after the Senate early Friday morning passed the $1.3 trillion spending package aimed at keeping the government open past midnight. With Congress already out of town, the government will head toward a shutdown if Trump does not sign the bill Friday. 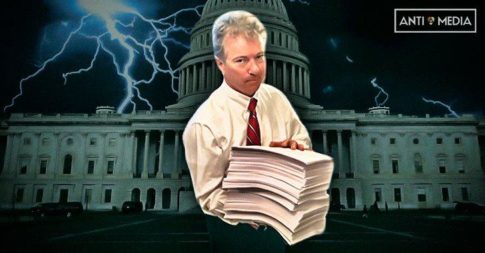 U.S. Senator Rand Paul is fed up with Congress’ drunken sailor spending style and looked to challenge the bloated spending package as it reached the floor of the Senate overnight. Despite being given approximately 24-hours to read the 2,000-plus pages of financial waste before a possible vote, the senator from Kentucky decided he would not only read the entirety of the bill (likely the only member of the Senate to do so), which he has repeatedly called “terrible” and “rotten,” but also live-tweeted out the highlights of where taxpayer dollars are actually going.

As of this writing, Paul is roughly 500 pages into reading the legislation and has already uncovered a mountain of waste. You can read the senator’s tweets below. This story will be updated as more tweets become available.

Well here it is, all 2,232 budget-busting pages. The House already started votes on it. The Senate is expected to soon. No one has read it. Congress is broken… pic.twitter.com/izvJlUEgUM

It’s a good thing we have Republican control of Congress or the Democrats might bust the budget caps, fund planned parenthood and Obamacare, and sneak gun control without due process into an Omni…wait, what?

I ran for office because I thought the Obama spending and trillion dollar annual deficits were a real problem for our country and now Republicans are doing the same thing. https://t.co/Fdi9riA3YK

FYI- The 2200+ page, budget-busting Omnibus has been printing for two hours in my office and still isn’t done.

3. Reading this monstrous bill full of grant programs begun decades ago reminds me of Reagan’s critique: the nearest thing to immortality is a government program.

I found a kernel of hope: “no funds in this act will be used to support or justify torture.”

no funds will be spent to prevent any state’s medical marijuana initiatives.

$961 million to destroy our chemical weapons. Who was it, exactly, who convinced our government to pay billions to develop weapons we now find deplorable?

Here are a few more highlights:

on page 355. NSA prohibited from targeting US persons with FISA 702 program.

sounds good —but — privacy advocates fear that NSA still does back-door targeting of US persons.

Courageous Senator Wyden has asked how many US persons caught up in supposedly foreign data base.

But Brennan and Clapper too busy spewing hatred of Trump to respond to legitimate requests.

Page 357. Sec. 8116 no funds can be used in Iraq in contravention of the War Powers Act

sounds good but . . . haven’t we been back in Iraq at war against new foes without any new congressional authorization?

Page 348 of terrible, rotten, no-good budget busting bill, a nugget that I wish we obeyed

sec. 8103: none of the funds may be used in contravention of the War Powers Act

hmm . . . that would mean we shouldn’t be spending $ in undeclared wars in Yemen, Libya, Niger, Somalia, Afghanistan

and I’m STILL reading. This bill is no @bradthor thriller.

All told, we’ve spent over a trillion dollars in this budget busting category.

I found it! I found it! Border security, what President Trump wanted!

no . . .wait a minute section says Defense can spend what funds it determines to enhance the border security of Jordan, Lebanon, Egypt, and Tunisia

eyes getting tired but really someone should read this beast.

Page 392 sec 9007: no $ shall be spent “for the permanent stationing of US forces in Afghanistan”

Wonder what they meant by permanent? Some might argue that after 16 years we approaching the definition of permanent.

Page 430 of “crumni-bus:” Good news. The government is going to “earn” $350 million by selling oil from Strategic Petroleum Reserve.

Bad news is the $ won’t go to reduce the $21 trillion debt. The $ will be instead be spent elsewhere by the Federal government.

Page 485: No $ used by the IRS to target citizens for exercising 1st amendment rights.

Do you think Lois Lerner knew about this part of the law before she targeted Tea Party groups? pic.twitter.com/t41kZ63oD8