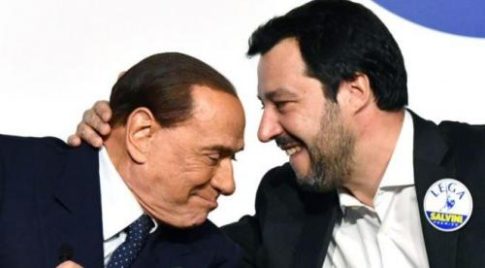 In what’s probably a nightmare scenario for the millions of Italians who supported left or center-left candidates, Forza Italia leader and former four-time prime minister Silvio Berlusconi has decided to support Matteo Salvini, the candidate of the euroskeptic Northern League, in his attempt to form a government after Euroskeptic and anti-establishment parties performed (once again) far better than expected.

Italy’s March 4 election was widely viewed as a victory for Berlusconi and the other members of his “center-right” coalition with two far-right parties. And now Berlusconi has confirmed that the coalition will unify behind the candidate of the anti-immigrant Norther League.

Berlusconi’s Forza Italia garnered just 14% of the vote compared with 17% for the North Northern League, and the members of the coalition had agreed before the vote to support whoever received the largest share. Before the vote, polls expected Forza Italia to win the largest share of the vote. Still, with a combined 37% of the vote total, the coalition still fell short of the 40% threshold needed to form a government, setting Italy up for a leadership showdown that could last for months.

“I am happy for Matteo Salvini and the League,” the 81 year-old said. Berlusconi didn’t run for office because of a law banning him because of his criminal convictions.

Still, Berlusconi emphasized that he’s still the center-right coalition’s indispensable power broker in what ended up being his first public statement since the vote, according to EuroNews.

“I confirm that…I remain Forza Italia’s leader, I will be the coordinator of the centre-right, I will be the guarantor for the unity of the coalition.”

Both the League an the 5-Star Movement say Italy’s president should name the leader of their own parties as prime minister.