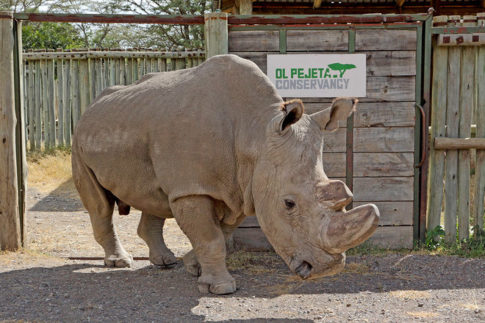 – This Is the World’s Last Male Northern White Rhino — and He’s Sick:

Sudan, a 45-year-old rhino and the last male of his subspecies (Ceratotherium simum cottoni), is ailing in the wake of two infections on his back right leg, according to Ol Pejeta Conservancy, the wildlife sanctuary in Kenya where the last three northern white rhinoceroses on the planet live.

“At the advanced age of 45, his health has begun deteriorating, and his future is not looking bright,” Sudan’s caregivers posted on Ol Pejeta’s Facebook page. Rhinos usually live between about 30 and 40 years, according to a follow-up comment by the caregivers, and Sudan’s problems are age-related. [In Photos: The Last 5 Northern White Rhinos]

Last of his kind

Sudan’s problems started with an infection on his back right leg near the end of 2017, according to Ol Pejeta. His veterinary team treated him, and he was back to normal in January. But since mid-February, vets have discovered that there is a deeper infection underlying the original one, and Sudan is not responding as quickly to treatment this time.

“We are very concerned about him — he’s extremely old for a rhino and we do not want him to suffer unnecessarily,” Ol Pejeta caretakers wrote on Facebook.

Even before this health setback, the chances of Sudan fathering new northern white rhinoceroses in his lifetime were basically nil. This subspecies of rhinoceros used to roam across Uganda, Chad, Sudan, the Central African Republic and the Democratic Republic of the Congo, according to Ol Pejeta, but poaching and chaos from years of civil war in the region sent the population plummeting. The last time a northern white rhinoceros was seen outside of captivity was 2007, and the subspecies is presumed extinct in the wild.

To save a rhino

Since then, the population of captive white rhinos has been falling one by one, largely due to old age. In 2014, after the deaths of a male named Suni at Ol Pejeta and a male named Angalifu at the San Diego Zoo, Sudan became the sole surviving northern white rhino male.

Sudan is one of only three northern white rhinoceroses left in the world, period. A female, Nola, died of old age and infection at the San Diego Zoo in November 2015, leaving only Sudan and two females, named Fatu and Najin, at Ol Pejeta. Najin is Sudan’s daughter, and Fatu is his granddaughter; both have conditions that make carrying a pregnancy impossible. What’s more, in 2015, Sudan’s sperm count was discovered to be very low, making him unlikely to father offspring naturally.

Conservationists are using artificial measures in attempts to save the species. For example, they’re using sperm and eggs extracted from northern white rhinoceroses, including Sudan and recently deceased individuals, to try to develop rhinoceros in vitro fertilization (IVF). This strategy depends on managing to fertilize a northern white rhinoceros egg in a lab and successfully implant it in a surrogate mother from the southern white rhinoceros subspecies (Ceratotherium simum simum), which was once at the edge of extinction but made a comeback thanks to intensive conservation efforts.

“Poor old Sudan.
But at least the deaths of all his fellow White Rhinos, won’t have been in vain, as the sex drive and sperm count of those little yellow people has grown so much they now total over a quarter of the world population, and just to think, it’s all down to powdered rhino horn aphrodisiac……..erm!”

And not to forget our elite (royal) “friends”, who gunned them down just for fun.