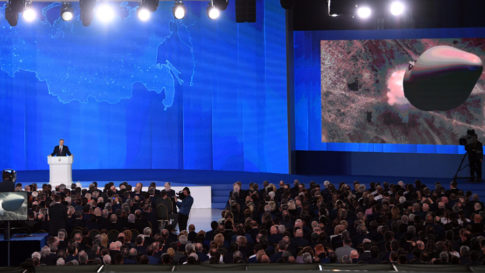 Russia has developed a number of advanced weapons systems, including a nuclear-powered cruise missile, which make all US capabilities aimed at undermining the Russian nuclear deterrent obsolete, President Vladimir Putin announced.

The latest advances in Russian strategic deterrence have made America’s anti-missile systems obsolete, so Washington should stop trying to diminish Russia’s security and start talking to Moscow as an equal partner, not the dominant military power it seeks to be, Putin said.

The Russian leader made the comments during his state of the nation address on Wednesday. While the first part of the address was a straightforward description of domestic goals and achievements, the second became a defiant challenge to the US. Putin announced that Russia has successfully developed several new weapons systems, which basically negate American anti-ballistic missile capabilities.

The Russian president accused the US of arrogance, saying that it thought that Russia would not be able to recover anytime soon after the collapse of the Soviet Union and that its interests can simply be ignored. One particular move – the withdrawal by George W Bush from the Anti-ballistic Missile Treaty (ABM) in 2002 – resulted in Russia being increasingly surrounded by American assets, which undermined the country’s nuclear deterrence.

“In the end, if we did nothing, this would render the Russian nuclear potential worthless,” Putin said. “They could simply intercept all of it.”

Without a nuclear deterrent, Russia would be exposed to US military pressure and would not be able to pursue a sovereign policy, Putin said. The president warned as early as in 2004 that Russia would not sit idle and that it would respond to this threat by developing new weapons systems.

Russia has now done this, according to Putin, who went on to present a number of new systems, some of which don’t yet have names, and which are all meant to counter current and future ABM systems. His speech was accompanied by a series of video clips showing those new systems, partially as footage of tests and partially as computer-generated images showing their capabilities.

One system is the new Intercontinental Ballistic Missile (ICBM) called Sarmat, or RS-28. It’s already well-known, but Putin stressed that its increased range allows the missile to reach US territory from Russia via a South Pole route. The US has dozens of interceptor missiles deployed in Alaska on the presumption that Russia’s ICBMs would approach from that direction, which would not be the case with Sarmat.

In fact, the Soviet Union had a missile that could approach the US from any direction. It was not a regular ballistic missile but rather one that put the warhead into low-earth orbit. The warhead would then deorbit when close to its target, thanks to its own engines. However, the R-36orb missiles were scrapped as part of nuclear reduction process.

Putin then went on to weapons systems that were not previously known to the public. One is a yet-to-be-named cruise missile with an almost unlimited range.

This is achieved thanks to a highly-efficient on-board miniaturized nuclear reactor, which powers the flight. Such a missile can fly low enough to avoid early detection, can change course to avoid enemy anti-missile assets along its path, and maneuver to pierce the anti-missile systems protecting its target.

According to Putin, Russia successfully tested a nuclear-propelled cruise missile at the end of 2017. It is now developing a new class of strategic weapons, he added.

The idea of a nuclear-powered projectile is hardly new. The US tried to develop one as part of Project Pluto in the early 1960s, but abandoned it since strategic missiles with chemical propellants proved to be a more viable alternative. Russia has reportedly made a breakthrough in this technology, becoming the first nation to bring it to maturity.

Putin also said that miniaturization of a nuclear reactor gave Russia another advanced weapons system in the form of a high-endurance underwater drone. The drone can dive “really very deep” and travel between continents at a speed that is several times higher than that of a submarine, a modern torpedo or even a surface ship, he said.

According to the president, such drones can attack enemy aircraft carrier groups, shoreline defenses or infrastructure, and cannot be countered by any defense system in the world. Both conventional and nuclear-tipped versions can be made, he said.

In December 2017, Russia completed the trials of a nuclear reactor which gives the drones such capabilities. The reactor is “100 times smaller” than those used by nuclear-propelled submarines and generates more power, Putin said. It can also reach its peak power 200 times faster than a conventional nuclear power plant.

The video shown for this weapon system didn’t include any actual test, but presumably the claimed miniaturization of a nuclear reactor, which was used for the cruise missile, can also work for a watercraft.

Putin then showcased two variants of a hypersonic weapons systems already developed by Russia. One is an air-launched vehicle that is already deployed in southern Russia for test combat duty. The projectile travels at a speed of Mach-10 and has a range of 2,000km (1,240 miles). The weapon, which is called Kinzhal (“dagger” in Russian) is available in conventional and nuclear forms, Putin said. A video shown to the audience included the moment the weapon was deployed by a fighter jet and the fire from its engine.

Another weapon that is being developed, but which was not shown being tested because its appearance is classified, according to Putin, is a hypersonic glider warhead deployed from space. Russia first tested one back in 2004 and has made significant progress since, the president said. The glider can fly in the atmosphere at speeds of over Mach-20 and can withstand a heat of up to 2,000C (3,632F) generated by air fiction. The system is in series production and is called Avangard (“advance guard” in Russian).

The last weapon system showcased by Putin during his speech was a combat laser, which he said Russia had started to deploy last year. A small video clip showed what presumably is an anti-aircraft laser system, but no test footage was shown.

Putin stressed that Russia would not need all these new weapons if its legitimate concerns had not been ignored by the US and its allies. “Nobody wanted to talk with us on the core of the problem. Nobody listened to us. Now you listen!” he said.

He suggested that the US abandon its costly and inefficient hostile plans towards Russia and start negotiating a security arrangement which would take Moscow’s interests into account.

“To those who for the last 15 years have been trying to fan an arms race, achieve unilateral advantage against Russia, impose sanctions, which are illegal from the standpoint of international law and are aimed at holding back the development of our country, including in the military area, I have this to say: All the things you were trying to prevent through your policies have already happened. You have failed to hold Russia back,” Putin said.

“You now have to acknowledge this reality, confirm that everything I said is no bluff – which it isn’t – think for some time, send into retirement the people stuck in the past and incapable of looking into the future, [and] stop rocking the boat that we all ride in and which is called planet Earth,” he said. Russia would be responsive if talked to as an equal partner, Putin added.

Will he back down and let them win as he has presumably been groomed to do, or will he be the Big One to fall, or will his unprogrammed opposition take over and fight for Russia.”