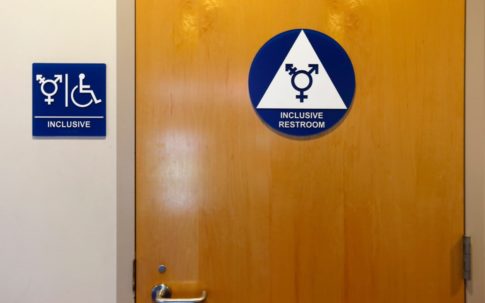 Under the 2010 Equality Act, it is unlawful for school to treat pupils less favourably because of gender reassignment.

– Teacher accused of ‘misgendering’ child was told by police that she committed a hate crime:

A teacher who was accused of “misgendering” a child was told by police that she had committed a hate crime.

The teacher, who claimed they were a “grammatical purist”, refused to acknowledge that the pupil self-identified as a boy and failed to use the pupil’s preferred pronouns of “he” or “him”.

It comes after warnings that schools are “sowing confusion” in children’s minds by over-promoting transgender issues, and that children are being encouraged to “unlearn” the difference between boys and girls.

Susie Green, CEO of Mermaids, a charity which supports transgender children and their families, told how the teacher had laughed in the child’s face and said “if you don’t want to be called a girl then don’t look like one”.

She said that the teacher and school’s management ignored three months of pleas from the transgender child and their parents and dismissed their requests, until she was informed by police that her actions constituted a hate crime.

“The parents and the young person communicated to the teacher directly that they were misgendering, that this was not appropriate and that they needed to change the way they were addressing the child,” Ms Green said.

“If someone makes a mistake, that’s fine. But this was not a mistake. It was deliberate and consistent. The actual comment from teacher was that they are a ‘grammatical purist’.”

She said that the child was so distressed by the teacher’s actions that their mental health suffered, and they took two weeks off school with anxiety and depression.

The pupil’s parents contacted Mermaids, and with their help, escalated the matter to the Equalities and Human Rights Commission and the police.

Ms Green said: “We spoke to a member of the police force, who contacted the CPS and clarified the position. The CPS said it was a hate crime.”

The school has since provided additional training for its staff, and the matter was resolved without any further action from police.

“We encounter this a lot,” Ms Green said. “When you are dealing with schools we try to be sensitive to the fact that this may be the first transgender student they have ever dealt with.”

When you are dealing with schools we try to be sensitive to the fact that this may be the first transgender student they have ever dealt withSusie Green, CEO of Mermaids

Under the 2010 Equality Act, it is unlawful for school to treat pupils less favourably because of gender reassignment.

A pupil will not necessarily be undertaking medical procedure to change their sex in order to be protected by the Act, but they must be taking steps to live in the opposite gender, or proposing to do so. But Ms Green said that many schools do not fully understand their obligations under the Act.

“Transgender and non-binary children are covered by the gender reassignment clause in this act, from the moment that they disclose that they feel that they are in the wrong body for their gender,” she said.

Mermaids, which has received funding from the Department for Education, was set up in 1995 to support “gender variant” young people and their families.

Last year, it emerged that a teacher is suing a school after he faced disciplinary action for referring to a transgender pupil as a girl.

Joshua Sutcliffe, from Oxford, says he was investigated after he said “well done girls” to a group that included a student who identifies as a boy.

The 27-year-old Christian pastor is now suing the school for constructive dismissal and discrimination.