– Riots Breakout Across Italy Ahead Of General Election (And Markets Are Getting Anxious):

The Italian government massively stepped up security across the country in anticipation of demonstrations by anti-fascist and far-right groups, ahead of the general election next weekend… 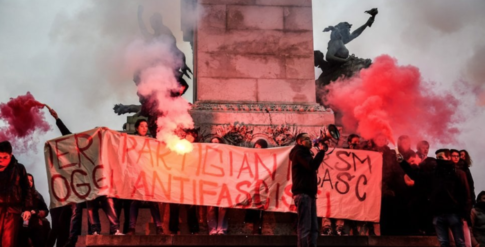 According to CNBC, here are the three leading candidates dominating the race:

Last night in Pisa, Italy, anti-fascist protestors formed a counter-demonstration against Lega leader Matteo Salvini, who was speaking at the center of town. Anti-fascist groups threw glass bottles and rocks and attacked police officers as they tried to silence Salvini, a leading anti-EU political figure, before next week’s elections.

In the early hours of Saturday morning, riots have erupted on the streets as police and protesters have clashed in Pisa and Milan with massive marches expected in Rome later in the day, said the Daily Express.

Former Italian prime minister Matteo Renzi is expected to visit an anti-fascist protest hosted by the Democratic Party in Rome. Preliminary reports indicate more than 20,000 people are expected to protest in just one march by the National Association of Italian Partisans (ANPI) and ’Mai piu fascismo’ (Fascism Never Again). There will also be three other protests planned in the Italian capital later in the day.

Police commissioner Guido Marino told the Daily Express: “We have two objectives – guarantee a high standard of counter-terrorism prevention and prevent violent groups from infiltrating the marches with negative consequences for order and security.”

Demonstrators from ’Mai piu fascismo’ (Fascism Never Again) are lining up for a rally in the heart of Rome.

“At the call of the left, thousands of people parade against fascism in Rome, in the rain but in good humour #AFP,” said one Twitter blogger.

“Anti-fascist protests have kicked off outside Termini station in Rome!,” alerted one twitter user.

Anti-fascist protests have kicked off outside Termini station in Rome! pic.twitter.com/cwyV6YKdKD

The Daily Express provides the economic and social backdrop in why Italy’s political environment is in chaos:

The bleak economic forecast and growing immigration concerns have resulted in toxic election campaigns for the upcoming vote amid fears of a revival of neo-fascist sentiment.

Tensions have risen across Italy ahead of the elections as right-wing Lega Nord Matteo Salvini has pledged large scale deportation of refugees.

Polls suggest the conservative coalition made up of former prime minister Silvio Berlusconi’s Forza Italia (Go Italy!) and its far-right allies will win the most parliamentary seats, but probably will fall short of an outright majority.

In that case, President Sergio Mattarella could ask a centre-right figure to try to form a government, or he could turn to Luigi Di Maio, leader of the anti-establishment 5-Star Movement, which looks set to become Italy’s largest party.

Before a poll blackout came into force on Saturday, 5-Star was polling at around 28 percent, ahead of the ruling PD on 23 percent and Forza Italia on 16 percent.