During last night’s “unscripted” CNN Town Hall on gun control, NRA spokeswoman Dana Loesch was given the courtesy of expressing her opinion in the spirit of mutual respect. Well, almost.

During a question by Stoneman Douglas student Emma Gonzalez, the attendees screamed and heckled her, calling Loesch “a murderer,” as CNN moderator Jake Tapper kept quiet.

Gonzales’ prepared statement, which CNN *may or may not have* approved, or given her:

Alright. Dana Loesch, I want to know that we will support your two children in the way that you will not. The shooter at our school obtained weapons that he used on us legally. Do you believe that it should be harder to obtain the semi-automatic and weapons, and the modifications for these weapons to make them fully automatic like bump stocks? 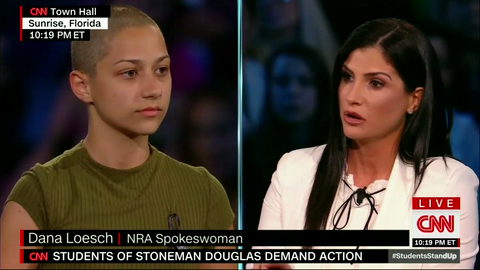 First, Loesch responded by encouraging young people to speak up: “I don’t think that anyone should deny you your voice or deny you your position because you are young” which however quickly drew booing from the crowd.

She continued: “I don’t believe that this insane monster should have ever been able to obtain a firearm. Ever” and said “I do not think that he should have gotten his hands on any kind of weapon.”

As the angry crowd grew louder, Loesch twice interjected “let me answer the question” adding “you can shout me down when I’m finished, but let me answer Emma’s question,” to which someone shouted “You’re a murderer!”

LOESCH: We had three lawmakers on this stage and only one of them hinted at reinforcing the background check system. It is only as good as the records submitted to it. Only one of them even got anywhere close to mentioning that. We have to have more than 38 states submit records. That’s number one.

LOESCH: Number two, we have to develop better protocol to follow up on red flags. This individual — this monster carrying bullets to school, carrying knifes to school, assaulting students, assaulting his parents, 39 visits in the past year. That should never have been allowed to get that far[.]

The next day, speaking at CPAC on Thursday, Loesch said she wouldn’t have been able to exit the town hall without her security detail.

“I had to have a security detail to get out,” said Loesch. “I wouldn’t be able to exit that if I didn’t have a private security detail. There were people rushing the stage and screaming burn her. And I came there to talk solutions and I still am going to continue that conversation on solutions as the NRA has been doing since before I was alive.”

Loesch then pointed out an odd inconsistency, noting that the people who call Trump a tyrant are the same people who want the president to confiscate weapons.

“The government can’t keep you safe and some people want us to give up our firearms and rely solely upon the protection of the same government that’s already failed us numerous times to keep us safe. And then they also call Trump a tyrant but they say they want the president to also confiscate our firearms? Try to figure that one out,” Loesch said.

“I want to make this super obvious point,” Loesch said. “The government has proven that they cannot keep you safe. And yet, some people want all of us to disarm. You heard that town hall last night. They cheered the confiscation of firearms. And it was over 5,000 people.”

10 thoughts on ““Burn Her”, “Murderer”: Angry Crowd Lashes Out At NRA’s Dana Loesch”