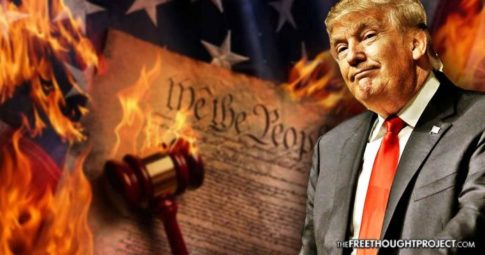 The White House released a memo Tuesday that indicates Trump has directed the Justice Department to draw up legislation to ban firearm modifiers including the “bump stock” used in the Las Vegas massacre.

Fox News then confirmed with the DOJ that the department is acting “quickly” on the president’s order.

“The department understands this is a priority for the president and has acted quickly to move through the rulemaking process,” spokesman Sarah Isgur Flores said. “We look forward to the results of that process as soon as it is duly completed.”

This move also got him praise from the Washington Post who took time out of their day to stop bashing Trump over Russian conspiracy theories and praise him for carrying on his predecessor’s move to limit the right of Americans to protect themselves.

As WaPo reports, President Trump on Tuesday signaled an openness to modest gun-control measures following what he called an “evil massacre” at a South Florida high school last week that left 17 dead and prompted passionate calls from teenagers for reform.

However, the Post went further alluding to the fact that Trump will likely go further than bump stocks.

“In private, he has indicated that he might do more, telling advisers and friends in recent days that he is determined to push for some sort of gun-control legislation, according to people familiar with the conversations,” the Post reported.

Trump, himself, even tweeted out that he wants Republicans and Democrats to come together for gun control.

Whether we are Republican or Democrat, we must now focus on strengthening Background Checks!

Axios also reported that Trump has “told associates that he doesn’t think high school kids should be able to buy guns, and is open to the idea of imposing a minimum purchase age of 21 for guns like those used in the Florida high school massacre.”

By that logic, Trump should also raise the age of joining the military to 21 too.

According to other reports, Trump is also mulling the idea of banning the private sale of guns altogether.

This move to push for gun control should come as no surprise. As TFTP reported in December, in an example of how both parties are willing to completely compromise their ostensible principals to further the agenda of usurping your rights, the Republican-controlled house voted to federalize gun laws across the country. Not only was this bill—which makes it easier for the federal government to disarm the citizens—voted for by the alleged pro-2nd Amendment Republicans but it was also supported by the NRA.

There are more government-growing, unconstitutional, anti-liberty pieces of legislation moving through the House this month than in any month I can remember.

So why is it that conservatives are freaking and the liberal mainstream media is now praising Trump?

Well, Trump — just like every other president in the last hundred years — is subject to the status quo, the ruling elite, and the deep state establishment. The last three presidents, in fact, have explicitly run on platforms on non-intervention only to be elected and flip-flop on every one of their promises.

The rights of citizens to protect themselves become second chair to the desire of the state to force citizen compliance.

Even if Trump was genuine on his promises, there’d be no way he would have ever been able to follow through. The unelected deep state in Washington has simply become far too powerful to be changed — which is why sites like the Free Thought Project, the Antimedia, Activist Post, We Are Change, Storm Clouds Gathering, the Corbett Report, and others within the alternative media have been predicting this since day one.

As is the case after every single time a crazed maniac causes a tragedy using firearms, politicians and their supporters come out of the woodwork to demand Americans give up their guns. Sadly, as is the case every single time, the citizens who support giving up their right to self-defense miss the bigger picture. When law-abiding citizens turn in their guns, only the government — and criminals — have guns.

The disconnect happens here. People who dislike Donald Trump and who, rightfully so, call out the problem of police brutality in America, want to give all the guns in the country to Donald Trump and the police.

The bottom line is that government, historically speaking, is the most violent entity in the world. In the 20th Century alone, governments were responsible for 260,000,000 deaths worldwide. That number is greater than all deaths from illicit drug use, STD’s, Homicides, and Traffic Accidents throughout the last 100 years — combined. And this is who we want to have all the guns?

What happened in Las Vegas and in Florida was tragic and, naturally, good people want to prevent it from happening in the future so they search for solutions. However, the reality is that disarming law-abiding decent citizens does nothing to stop the next crazed criminal from taking innocent lives.

But what about Australia? They gave up their guns and shooting fatalities declined. On the surface, this is technically correct.

Australia’s anti-gun campaign and propaganda launched after a mass shooter killed 35 people in one heinous act of murder. The tragedy took place in 1996, in the city of Port Arthur. Following the crime, and in the wake of national agony, then Prime Minister John Howard moved to take back all the gun rights Australians had since the country’s founding.

The Port Arthur shooting was a tragic time for the Aussies. But the reality is that Australia never really had a mass shooting problem and gun violence was on the decline before Port Arthur.

In 1996, the government took at least 650,000 guns, or about one-fifth of all guns in the country; higher estimates put the numbers at 1 million and one-third.

Even with possession shaming, and amid the fear and threat of prosecution, Australians have yet to give up all their guns. It is estimated nearly 300,000 guns are still on the streets in the land down under. These guns don’t belong to the law-abiding citizens either.

In the United States, there are over 300,000,000 firearms. An Aussie-style program would never work. Even if it was tried, it would lead to massive civil unrest, violence, arrests, and even civil war.

Not too mention, as stated above, even if civil war were averted and Americans all turned in their guns, only the tyrannical state and the criminals would have guns. Say goodbye to freedom.

Well, the answer is not so black and white. However, statistically, even with record numbers of guns on the street, time appears to be the one element that lowers violent crimes.

Even with the “worst mass shooting in modern history” happening in Las Vegas, if we look at the last 100 years in the US, violent crime is declining.

According to official FBI and U.S. Department of Justice reports, the rates of violent crime in the U.S. are now at their lowest level in 40 years. Violent crime rates of 2015 were 1/4 the rates of 1993? Other countries are experiencing a similar decline. And, with the exception of one or two years, deaths of law enforcement officers reached their lowest in 50 years as well.

In fact, right now, in our history as a human species, it is the safest time to be alive — not just in America either. All across the planet, despite your television saying otherwise, violence against other humans is declining.

In the days of mass communication and massive technological leaps, people are able to shed stereotypes and fears far faster than would otherwise lead them to ignorant violence. Governments and mainstream media now have to implement extensive propaganda campaigns to sell society wars because the old “they are bad” technique is simply losing its effect.

The warmongering powers that be have to resort to this propaganda because of those 300,000,000 guns in the homes of law-abiding citizens. Because we are a well-armed society, the state cannot simply demand we acquiesce to their every desire.

So, as you hear the president and other citizens call for gun control, or even if you feel the same urge, remember who benefits from it — the 1 percent — who are the most violent humans left on the planet.