When has the establishment ever told the truth??? 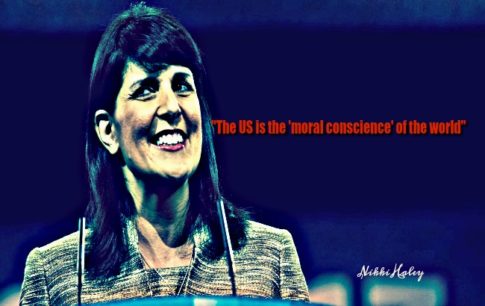 – Five Reasons To Be Absolutely Certain That The Establishment Is Lying About Syria:

Whenever you see UN Ambassador Nikki Haley on video she’s trying to start World War Three. At today’s UN Security Council Haley gave remarks about why the UN should “take action” against two of the US power establishment’s favorite targets, Russia and the Syrian government, due to allegations that Bashar al-Assad has been using chemical weapons.

That’s right, just three weeks after the Trump administration unveiled its planto keep thousands of US troops in Syria in order to force regime change, the tired old chemical weapons allegations have been unearthed and recirculated to trusting western mainstream media audiences.

I am not a Syria expert by any stretch of the imagination. If you want detailed information about what’s really going on in that nation I recommend getting in touch with real Syrians online and following the work of independent investigative journalists who regularly go there like Vanessa Beeley. Nevertheless, despite my lack of boots-on-the-ground expertise and intimate knowledge of every detail of what’s going on in that country, I am absolutely certain that the western power establishment is lying very extensively about what is going on in Syria.

One hundred percent certain, zero margin for error. I’d bet my life on it.