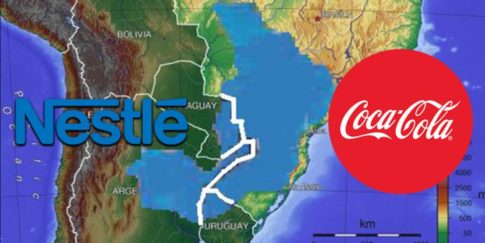 “There must be another list of projects to be granted or privatized in the medium term, with auctions that may occur in up to one year, such as Eletrobras energy distributors and freshwater sources,” adds the news site, translated via Google from Portuguese.

This issue extends beyond South America, as all humans will be affected by the decision to privatize the second-largest aquifer system in the world. Essentially, the corporations are profiting off a natural resource that should be freely available to all.

Under the Guarani Aquifer Project’s Environmental Protection and Sustainable Development Project, known as ANA’s Guarani Aquifer Project (SAG), the aquifer would be managed and preserved for present and future generations. Following the conservatives’ victory in Argentina and the coup d’état, pressed for by the ultra right in Paraguay and Brazil, only Uruguay was left to vote on the privatization of the aquifer.

Approximately two-thirds (1.2 million km²) of the reserve is located in Brazilian territory, specifically in the states of Goiás, Mato Grosso do Sul, Minas Gerais, São Paulo, Paraná, Santa Catarina and Rio Grande do Sul. Future generations will ultimately suffer if this deal goes through, which is why human rights organizations around the world are getting involved.

“Organized civil society is alert to possible privatization strategies of transnational economic groups. Since 2003, the Organization of American States (OAS) and the World Bank, through the Global Environment Facility (GEF), have implemented the Environmental Protection and Sustainable Development project to gather and develop research on the Guarani Aquifer , with the objective of implementing a common institutional, legal and technical model for MERCOSUR countries,” says a document from the Human Rights Organization Terra de Direitos.

Nothing will change if we, as a populace, sit idly by and watch greedy individuals exploit the environment and snatch precious resources from present and future generations. If you agree, please share this article to raise awareness.