As we reported yesterday, in a surprising twist in the ongoing Syrian proxy war, YPG Kurdish fighters in north-western Syria – who are backed by the US – had struck a deal with the Russia-backed Assad regime for Syrian forces to enter the Afrin region and repel a Turkish offensive which began last month. 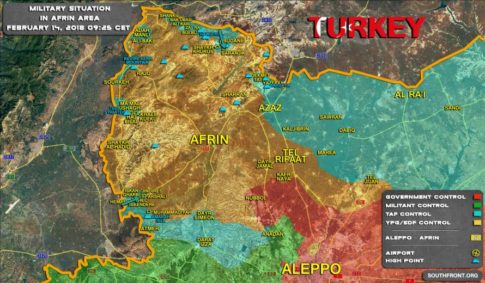 We didn’t have long to wait for this escalation to unfold, and moments ago a convoy of fighters waving Syrian flags entered the northern Kurdish-held region of Afrin, which Turkey is targeting in a cross-border operation, according to footage on Syrian state TV shows.

The pro-government fighters were filmed entering the village of Nubul in some 20 pickup trucks.

The moment when #Syrian militias entered #Afrin while ago. pic.twitter.com/N3GFv0mhld

Pro-regime people’s militias sent earlier today as “reinforcements” to #Afrin are shown here turning back on their heels at the #Zyara #YPG Asayish Crossing.
Was it all a propaganda stunt?! pic.twitter.com/jUvVRcHhyu

As Bloomberg adds, Rami Abdurrahman, head of the U.K.-based Syrian Observatory for Human Rights, which monitors the war through activists on the ground, also confirmed the movement.

VIDEO: An artillery shell lands nearby during a live report from #Afrin by a correspondent on Lebanese Hezbollah-owend Al-Manar TV pic.twitter.com/miBmfjlFjn

Meanwhile, in response to yesterday’s news of the odd alliance, Turkish officials warned that their forces would lay siege to the city of Afrin if pro-Damascus fighters show up there.

Speaking to members of the ruling Justice and Development Party’s (AKP) on Tuesday, Erdogan said the city center of Afrin will soon be besieged by advancing Turkish troops and allied Syrian militias, according to Hurriyet.

“Preparations in the field take some time. In the coming days, we will lay siege to Afrin city; it’s very important that everywhere we go should remain secure,” Erdogan said, as cited by Hurriyet. He added: “Thanks to the siege, the YPG will have no room for bargaining with the Syrian regime.”

To Erdogan’s chagrin, the Syrian forces would not grant him the time he needs to roll out his siege. However, following news of the Syrian activity, the Turkish response was instant, with headlines quoting local media that Turkish jets are now bombing the area where the pro-Syria convoy entered the fight against Turkey:

While Citi notes that “as the situation is developing, there is no way of telling what will happen next” the market has already taken action, and in response both Turkish stocks and the Turkish lira have tumbled, sliding 0.8% to session lows against the dollar… 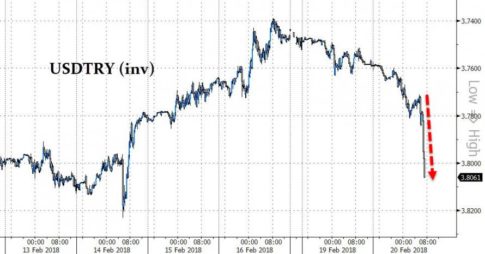 … while Turkish equities are down 2%; the world now awaits for the reaction, if any, from Russia and Iran, and whether these two protectors of Syria’s president will get directly involved.