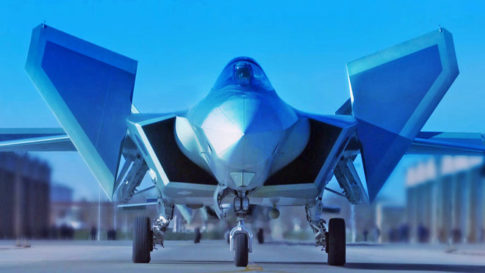 In a post on the state outlet Xinhua News Agency, the Chinese government announced that the fighter jet — created to counter the capabilities of the American F-22 Raptor — has entered service in the People’s Liberation Army with “comprehensive combat capabilities.”

The J-20, like the F-22 Raptor, uses a specially-shaped airframe and advanced materials to minimize its radar signature — making it hard for enemies to detect by conventional means.

The advanced aircraft has long been the subject of intense speculation, with details about its design and technology trickling out in dribs and drabs. [Supersonic! The 11 Fastest Military Planes]

While the J-20 is operational, it doesn’t yet have the capabilities to match its American counterparts, the South China Morning Post, a major Hong Kong newspaper, reported. Two military sources told the Post that the J-20s in service aren’t equipped with the WS-15 engines they were built to fly with.

According to the Post’s reporting, a WS-15 engine exploded in 2015 during a ground test, indicating quality-control issues with the single-crystal turbine blades necessary for the powerful turbofan engine.

The operational J-20s, the Post reported, are instead equipped with less powerful, modified WS-10B engines designed for the previous-generation Chinese fighters, the J-10s and J-11s. And even with enhancements for use in the J-20, they aren’t powerful enough to enable the J-20s to “supercruise” like U.S. stealth fighters.

As Popular Science reported in September 2017, “supercruise” is the ability of a plane to accelerate to supersonic speeds without unstealthily dumping extra fuel to burn in the engine’s jet pipe — that is, without engaging afterburners, which have a more easily-detectible radar signature.

According to the Post, the J-20’s weapons array makes it the most effective fighter jet in the Chinese arsenal for countering the planes of a stealth-enabled superpower like the U.S., but the J-20 likely won’t enter mass production until the WS-15 is ready. And that could take another eight years.

The exact definition of “fifth generation” is a bit vague. But public documents from China Power, an American project geared toward researching Chinese power, and Lockheed Martin, which builds the American fighters, suggest that fifth-gen aircraft are stealthy even when armed, can cruise at supersonic speeds and involve advanced computing, sensors and electronics.