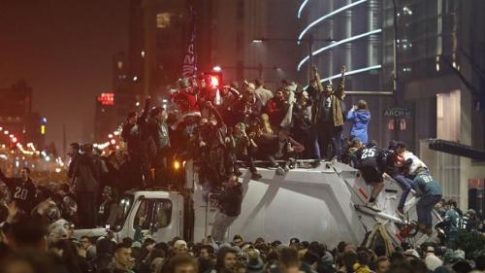 Last night, after underdog Eagles defeated Tom Brady and the Pats to win the Superbowl, we predicted that “Philly GDP was set for a major Keynesian boost tonight”…

Sure enough, thousands of ecstatic Eagles fans took to the streets of Philadelphia Sunday night after their first ever Super Bowl win, beating the five-time champion New England Patriots 41-33 at U.S. Bank Stadium.

Earlier in the day, Philly was hard at work preparing for whatever outcome was in store for the Eagles – including officers from 60 additional police departments, 400 National Guard members, US Secret Service, ICE, FBI, private security, County Sheriff’s Reserves, and over 10,000 civilian volunteers. Oh, and they also greased up the light poles for good measure:

And despite all of that, tens of thousands of crazed Eagles fans poured into the streets and promptly chimped out with joy – much of which can be found in the Twitter feed of Barstool Sports.

As expected, celebrations of the historic Super Bowl victory of the Philadelphia Eagles led to havoc on Sunday night, as cheering crowds damaged property and turned cars upside down, and an explosion of unknown ripped in the downtown area and several people were injured in street violence.

The Ritz Carlton Awning was mercilessly partied on until it collapsed:

#RIP to this awning pic.twitter.com/eki786x7Oe

A Toyota Prius owner should have known better than to park there. What if the Eagles had lost?

Whatever, the streets are going to be undriveable for a month or two anyways pic.twitter.com/zdL8UB6hXc

Sadly, several traffic signals and other probably ungreased poles did not survive the night:

Thoughts and prayers to all traffic signals and poles in Pennsylvania tonight pic.twitter.com/uRlHUw68oG

We have our first of many casualties of the night pic.twitter.com/8rFcTPK1IU

A dance party broke out and music spontaneously happened:

Five stories up, some students at the Merriam Theater of the Arts just broke out some brass intruments and led Broad Street in the Eagles’ fight song pic.twitter.com/PdksYCxNQR

THE CITY OF PHILADELPHIA IS BURNING DOWN pic.twitter.com/lcbHLd894P

Call in the National Guard to quarantine Philly pic.twitter.com/I7N2aJQrsO

People are rioting and looting in Philly after the super bowl, yelling “Everything is free,” as they trash this gas station.

Some guy went on the rails:

No one fears death anymore pic.twitter.com/o9TnClyn4r

Many vehicles were surfed:

This kid is the king of Philadelphia tonight pic.twitter.com/yhE3Zj3d91

Prince of the City pic.twitter.com/wMAKAvq4pD

A hoarde of zombies scaled a fence, because they can do that in this one:

This kind of teamwork to get the kegs over the fences is why they call it the city of brotherly love pic.twitter.com/z6HDmv16XW

A shooting was reported on a highway and the police are requesting back-up. The situation in some parts of the city is apparently out of control, with most of the traffic lights taken out and people continuing to vandalize buildings. The central Old Navy store has reportedly been vandalized, with its doors ripped open and/or its front window broken in.

People yelling “Everything is free,” looting, trashing this gas station. Damn it, Philly we better than this. pic.twitter.com/WecXaAmrFh

SWAT is pushing the crowd South on Broad pic.twitter.com/CLbpzd3ZZE

And lastly – what better way to cap off an Eagles win? She pretty much had to say yes…

The kid that comes from this marriage is gonna grow up to punch so many horses in the face pic.twitter.com/7gbGKzuxfh