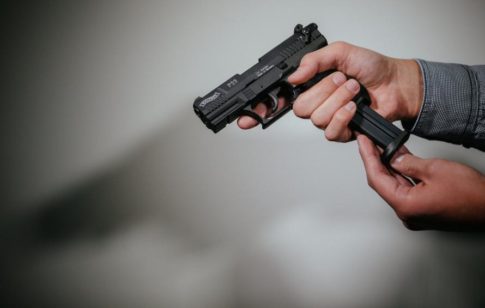 – Up In Arms: German Small Arms Ownership Soars 85% In Under 2 Years:

Two years after your chancellor decides to admit over 1 million undocumented middle-eastern immigrants to boost the economy and instead gets a series of terrorist attacks in return, this is the outcome: “Germans are taking up arms of angst.”

According to Handelsblatt, demand in Germany for non-lethal weapons, including gas pistols, flare and stun guns, as well as pepper spray is on the rise. While in the US, the German magazine notes, every mass shooting is followed by yet another heated gun debate. in Germany gun-related crime is comparatively rare, but the issue of guns is increasingly in the forefront of political discussions.

That’s because sales of freely available arms are booming. The number of applications for small arms permits has set new records. In 2017, 557,560 people obtained such a license. In January 2016, only 300,949 people had a permit. This means ownership soared by a staggering 85% in just under two years.

Following the Paris terror attacks in 2015 and the sexual assaults on women on New Year’s Eve in Cologne the following month, demand for deterrent devices has taken off. “After the attacks in Paris on the Bataclan music venue in November 2015, a wave of uncertainty spilled over to Germany,” said Ingo Meinhard, director of the German association of gunsmiths and gun dealers.

Why the scramble for self-defense? “The fact that Germans are arming themselves might be rooted in a sense of deteriorating safety” Handelsblatt philosophically observes.

There is a growing feeling that the state cannot sufficiently protect its citizens and therefore they must protect themselves. Recent cuts to the police force contributed to the problem.

And, of course, there is the refugee problem. Some see the influx of refugees and migrants to Germany since 2015 as a trigger to a worsening security situation. The number of crime suspects classed as immigrants – including asylum seekers, refugees and illegal immigrants – rose to 174,438 in 2016, an increase of 52.7 percent from the previous year. Interior Minister Thomas de Maizière said.

“This can’t be sugar-coated.”

Others are blaming, what else, “fake news.”

Some experts beg to differ. Although the increasing demand for small firearms proves that citizens feel unsafe, a lot of it comes down to distorted or exaggerated media reports and social media posts by populists, argued André Schulz, head of the Criminal Police Association. It’s not rationally justified and does not reflect the “objective risk situation,” he said.

At least they haven’t blamed Putin yet for Germany’s weaponization scramble.

As discussed previously, while Germany has strict gun control laws, it’s not difficult to obtain a license for non-lethal weapons. The applicant has to be at least 18 years old, though convicted felons, alcohol or drug addicts and people with a record of mental illness are barred. “The authorities examine the applicants thoroughly,” said Mr. Meinhard. “No one should be afraid of these people.”

However, Holger Stahlknecht, state interior minister in Saxony-Anhalt, isn’t convinced. He worries about the current trend and warns that arming oneself with small weapons can lead to a false sense of security. “Obviously, people believe they are buying safety with a small gun license,” he said.

“However, this sense of security is deceptive, since these weapons could escalate a situation and could even be used against the owner.”

One thing is clear: Germany is becoming increasingly militant in response to what many thought was a problem that ended when Merkel ended her “closed door” policy. And while for now the spike in self-defense measures is confined to non-lethal means, a few more terrorist attacks and this too will surely change.