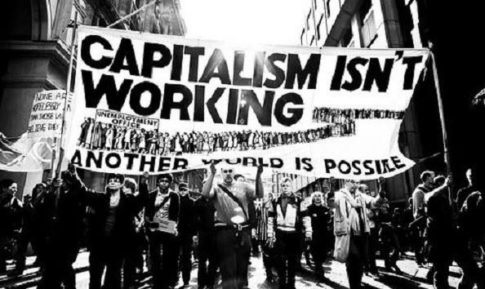 Today, more than at any time previously, Westerners are justifying a move toward collectivist thinking with the phrase, “Capitalism has failed.”

In response to this, conservative thinkers offer a knee-jerk reaction that collectivism has also had a dismal record of performance. Neither group tends to gain any ground with the other group, but over time, the West is moving inexorably in the collectivist direction.

As I see it, liberals are putting forward what appears on the surface to be a legitimate criticism, and conservatives are countering it with the apology that, yes, capitalism is failing, but collectivism is worse.

Unfortunately, what we’re seeing here is not classical logic, as Aristotle would have endorsed, but emotionalism that ignores the principles of logic.

If we’re to follow the rules of logical discussion, we begin with the statement that capitalism has failed and, instead of treating it as a given, we examine whether the statement is correct. Only if it proves correct can we build further suppositions upon it.

Most people seem initially confused by this question, as they’re residents of either a European country or a North American country and operate under the assumption that the system in which they live is a capitalist one.

So, let’s examine that assumption.

A capitalist, or “free market,” system is one in which the prices of goods and services are determined by consumers and the open market, in which the laws and forces of supply and demand are free from any intervention by a government, price-setting monopoly, or other authority.

Today, none of the major (larger) countries in what was once referred to as the “free world” bear any resemblance to this definition. Each of these countries is rife with laws, regulations, and a plethora of regulatory bodies whose very purpose is to restrict the freedom of voluntary commerce. Every year, more laws are passed to restrict free enterprise even more.

Equally as bad is the fact that, in these same countries, large corporations have become so powerful that, by contributing equally to the campaigns of each major political party, they’re able to demand rewards following the elections, that not only guarantee them funds from the public coffers, but protect them against any possible prosecution as a result of this form of bribery.

There’s a word for this form of governance, and it’s fascism.

Many people today, if asked to describe fascism, would refer to Mussolini, black boots, and tyranny. They would state with confidence that they, themselves, do not live under fascism. But, in fact, fascism is, by definition, a state in which joint rule by business and state exists. (Mussolini himself stated that fascism would better be called corporatism, for this reason.)

In recognizing the traditional definition of fascism, there can be no doubt that fascism is the driving force behind the economies of North America and Europe.

In addition, the concept of any government taking by force from some individuals the fruits of their labour and bestowing it upon others is by no means free-market. It is a socialist concept. And, in any country where roughly half of the population are the recipients of such largesse, that country has, unquestionably, settled deeply into a socialist condition.

However, this is by no means a new idea. As Socrates asked Adeimantus:

Do not their leaders deprive the rich of their estates and distribute them among the people; at the same time taking care to preserve the larger part for themselves?

So, which is it? Are we saying here that these countries are socialist or fascist?

Well, in truth, socialism, fascism, and, indeed, communism are all forms of collectivism. They all come under the same umbrella.

So, what we’re witnessing is liberals, rightfully criticising the evils of fascism, but failing to understand it for what it is—a form of collectivism. Conservatives, on the other hand, do their best to continue to operate under their countries’ socialist laws, regulations, and regulatory bodies, whist continuing to imagine that a remnant of capitalism remains.

And so we return to the question, “Have you ever lived in a country in which, during your lifetime, a free-market system dominated?”

Such countries do exist. It should be pointed out, however, that even they tend to move slowly toward collectivism over time. (After all, it’s in collectivism that they gain their power.) However, some countries are “newer,” just as the US was in the early nineteenth century and, like the US, the governments have not yet had enough time to sufficiently degrade the economies that have been entrusted to them.

In addition, some citizenries are feistier than others and/or are less easy to convince that, by allowing themselves to be dominated by their governments, they’ll actually be better off.

Whatever the reasons, there are most certainly countries that are far more free-market than the countries discussed above.

But, what does this tell us of the future? What can be done to turn these great powers back to a more free-market system? Well, the bad news is that that’s unlikely in the extreme. To be sure, we, from time to time, have inspired orators, such as Nigel Farage or Ron Paul, who remind us what we “should” do to put these countries back on track, so that they serve the people of the country, rather than its leaders. But, historically, such orators have never succeeded in reversing the trend one iota.

History tells us that political leaders, in their pursuit of collectivism, never reverse the trend. They instead ride it all the way to the bottom, then bail out, if they can.

However, it is ever true that, in some locations in the world, there have always been free-market societies. Over time, they deteriorate under the hands of their leaders and, as they do, others spring up.

The choice of the reader is to look upon the world as his oyster – to assess whether he is more or less content with the country he’s in and confident that it will continue to be a good place in which to live, work, invest, and prosper, or, if not, to consider diversifying, or even moving entirely, to a more rewarding, more capitalist jurisdiction.

1 thought on ““Capitalism Has Failed””